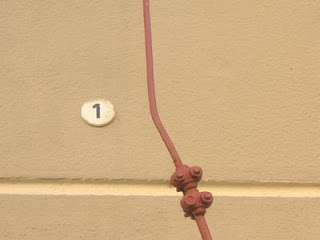 #1, Parizska, Josefov, Prague
It is very easy to get lost in Prague.  It's even easier when you're more interested in looking at walls than at a map.  You're only there a week, you'll never figure it out, so why bother over the coordinates?  You can always look at a map later.  This is one of the earliest numbers of my project, gathered as part of a 3-city, 2-week scavenger hunt across Prague, Vienna, and Budapest.
I've gathered thousands of images since the mad dash of 2006, but I still love this tiny #1.  The scale is hard to judge from the picture, but it was hardly the size of a silver dollar.  It, and the charming red line of pipe, was an underdog amid the maze of ancient streets and dizzyingly beautiful streetscapes.  I remember distinctly the goblet of Delirium Tremens, mussels and frites consumed at the nearby Les Moules afterward as, mid-afternoon, it started to rain.
Posted by Therese Cox at 12:00 AM

What a shame that I have only discovered this blog now.

So, I set myself the task of reflecting upon each post BEFORE you get to #365.

Intruiging concept. And I love the importance you occasionally place upon text.