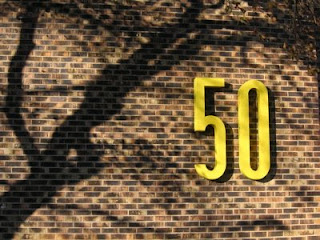 #50, Elk Grove Village, IL
I have a few distinct memories of childhood trips to see Dr. McNamara, our family doctor, and they're mostly related to things I'd see around me. First, there were the red metal railings along the interior stairwell. I'll have to verify this, but I seem to remember one of them was positioned at kid-height, which I thought quite thoughtful of them. I still had fresh fears from Tot Lot preschool that I'd slip through the open spaces between stairs and was grateful for anything to cling to during my ascents and descents. (This is why I still balk at trips up the wobbly Plexiglass stairwell at the Apple store in SoHo.) Second, there were the joyfully tactile, hedgehog-like Bristle Blocks in the waiting room that helped pass the interminable waiting period. Wait time was usually no more than five or ten minutes, but to a kid who'd rather be out on a bicycle, it felt like enduring the long stretch of Christmas Eve night, only with much less to look forward to. And then there was the joy of spotting the gigantic numbers on the nearby office/industrial buildings. They were unapologetically yellow, rather hideous, and completely out of scale with any suburban house numbers I'd ever seen. If I'd been standing next to one, it would've measured close to my own height. I couldn't believe that someone actually made numbers that big and bright and that they were allowed to be on buildings, especially buildings so brown and so boring. This 50, along with its neighbors 60 and 70, are still there on those boring, brown buildings, and any time I visit my hometown and stop by for a slice at nearby Munchie's pizza, they still make me scratch my head and wonder.
Posted by Therese Cox at 12:00 AM

I once had an english education professor (might it be the enigmatic professor we had in common?) at NYU comment that while she was not a "math/science" person, she could really appreciate the aesthetics of math. She loved, for example, the way a physics problem looked in chalk on a blackboard. That really stuck with me and reminds me, in many ways, of your poetic way of perceiving urban numbers.

I think I'd have an easier time admiring the way physics problems looked on a blackboard if I wasn't constantly having to walk into a room and erase them. Ha! But yes, that's a very accurate description of how I feel about numbers. Just let me look at them. Don't ask me to do anything fancy with them.

I love this picture. The light is gorgeous, and the numbers just fill me with optimism. Which is odd, because yellow usually fills me with dread and anxiety. Go figure!

fedge A lie one tells while drunk.

I remember reading somewhere that rooms painted yellow were supposed to cause anxiety, which could explain a lot as my childhood bedroom was painted lemon yellow. Fact? Or just someone reading too much Charlotte Perkins Gilman? Might be time for Snopes. In any case, I like yellow. In small doses.

My memory of small doses, is yellow. Small doses of cod liver oil.