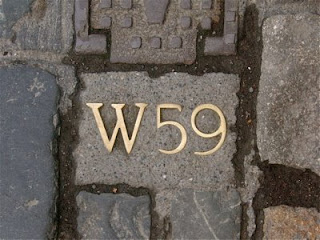 #59, Trinity College, Dublin
I was going to launch #59 with a ripping yarn of how -- upon these very cobblestones -- I once infiltrated the Trinity College Chapel Choir during Fresher's Week, despite the fact that I was neither a freshman nor a student at Trinity, only a twenty-something fiction writer with a nosering and a hangover longing to drape myself in a white surplice and sing some Purcell alleluias. But I decided what really needs airing here is a confession of a different sort.
I really, really like looking down at the pavement.
Trawling for house numbers and admiring architecture inevitably leads to many fruitful hours pedestrianizing with wide eyes, a sweeping gaze, and a backward-craned neck, but there are days when -- who knows why? stiff joints, bad mood, idle curiosity -- I just want to stare at cobblestones, manhole covers, water and gas access covers, drains, and grilles. I take peculiar comfort in the fact that I am not alone.
No, it's not for everyone, but I fail to understand how someone would not be fascinated by the prospect of seeing a Parisian drain, an Armenian manhole cover, a hammer-and-sickle in the center of a sewer cover in Abkhazia. Fortunately, to feed my appetite for such things I have the internet. In the wee hours after a long day of exploring the streets of my city, I can steal away to the web and check out what the Cambodians have covering their sewers. I blame Manhole Covers, Etc. ("I've been looking down so long, I don't know which way looks up") for justifying and perpetuating my silly obsession with mundane urban street furniture. And for those who'd like to contribute images from your corner of the globe or just have a look around, there's a little something for everyone at Sewers of the World, Unite! This goes out to all those out there -- you know who you are -- who feel industrial design gets short shrift, goes unsung, or is all too often stepped on. Yes, that was a terrible pun.
There, I've said it. It had to be done. As that prodigiously eye-linered British songstress Adele sings: Should I give up, or should I just keep gazing at pavements, even if it leads nowhere? Er, well, it goes almost like that. But give me a break, won't you? Call my modification artistic license, call it, as Joyce might, "almosting it." But what do you expect? Do I look like the Trinity Chapel Choir to you?
Posted by Therese Cox at 12:00 AM

I would very much like to hear the full story of the time you tried to infiltrate the Trinity College Choir.

And... I can't think of sewers without 3 things coming immediately to mind:
1. Our verbose narrator in Ellison's "Invisible Man"
2. The "Teenage Mutant Ninja Turtles" cartoons that I watched daily as a compromise with my brother so that he would watch reruns of "Muppet Babies" with me. (I may or may not, have also played with his action figures)
3. The creepy clown in the movie "It."

Jackie, it's a good story. It sounds even better over a pint.

Your examples got me thinking about how there's a whole other side to the city on the other side of those sewer caps. There's a slew of books that have been written on the topic: The Mole People, New York Underground, and another whose name escapes me now. There's a picture of a manhole cover on the book jacket. Hmm. I'll have to go to Book Court and see if I can find it.

I shall purloin "pedestrianizing", thank you.