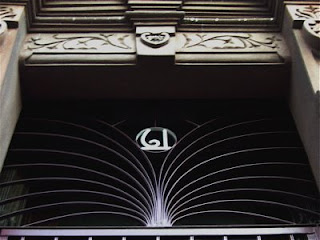 #61, Fort Greene, Brooklyn
It was late afternoon and I was walking around Fort Greene with a mandolin in one hand and a camera in the other. It was Superbowl Sunday and now that I had my borrowed instrument, the quest was twofold: to have a pint of Harp and a plate of nachos somewhere before the football started and to find a 61 before it got dark. For one reason or another, some numbers are elusive. I could post a whole month of 60's and yet finding a 61 has felt like looking for Greta Garbo on a particularly bad day. While I like posting numbers in order, I'm not methodical at all in my quest for them. As a result, I have certain days looming ahead that are numberless, empty, blanks waiting to be filled. Finding this 61 just before dusk was a treat. It meant I didn't have to break my neck trying to find one by the deadline.
I'm in the mood to offer a little project history since I haven't touched on it since my post 365 Numbers in 365 Days. The original idea behind the project was to collect numbers 1-99 over the course of two weeks in three cities: Prague, Vienna, and Budapest. I got them all (including a blurry 61a, not pictured here) and had a great exhibition at the Fall Cafe in Brooklyn in 2007. My inspiration was Zak Smith's Pictures Showing What Happens on Each Page of Gravity's Rainbow, which I first saw at the Whitney Biennial in 2004. If you are unfamiliar with his work, I heartily recommend you check out the project on his website. I also have the book, which was published by Tin House Books in 2006. But nothing quite measures up to the sheer impact I felt walking into that room in the Whitney where all illustrations -- all 760 of 'em -- were displayed in a grid on the wall.
There are many ways I view this project: as an aesthetic exercise to gather numbers I find beautiful; as a frantic scavenger hunt where nothing matters except that I get them all and get them on time; as a writing exercise to use each number as a jumping off point to explore architecture, memory, space, and story. An added bonus has been the ability to share all my pictures and palaver on this blog and hear what stories or associations these images or stories evoke in others. So to those gentle readers who have taken the time to visit, whether to browse, read, or comment, I want to say thank you for helping it evolve into something quite different. That is all.
Posted by Therese Cox at 12:00 AM

I like the delicacy of the "spring" under the number.

I appreciate the explanation at this point. Many of your points match some of my questions.