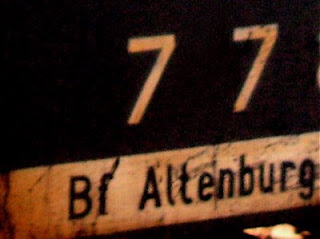 #77, train between Vienna & Budapest
In one of the dozens of black binders laying about my apartment, enclosed in a rope-tie envelope, is a clipping from very old issue of Print magazine. The article is called "Trainspotting." While it's just as likely that at the time the article appeared, I was avidly clipping magazine pictures of Ewan MacGregor for his role in the movie by the same name, the article is in fact about trainspotting itself: the odd pastime of watching trains and obsessively remarking on the serial numbers, details, and arrival and departure times. It's what I would spend all my days doing if I was, in fact, an eccentric British man living in, say, Leeds with a walking stick and two mangy dogs who could get away with that sort of thing. In fact, I think all of this number & typography business of mine is just a gateway drug.
The article, written by the designer Philip Krayna, is part photo essay, part meditation on the pleasures of observing not trains in general but more specifically, the typography of railway cars. At the time that I clipped it, I had no interest in photographing numbers or writing about type and space and buildings or trains, but it spoke to me. For who knows what reason, I fell in love with this article and Krayna's accompanying photographs, many of which resemble this 77. I hadn't thought of the article in years. I wonder now if I had it all along in the back of my mind and didn't even realize its influence. It's strange to find the seed of a project that dates back so far. (Was it seven years ago? Ten?) I wanted to share an excerpt from the article here:

My fascination with railroad typography began a few years ago when my car overheated on a desolate stretch of highway in California's San Joaquin Valley. While I waited for the car to cool down, I wandered to a nearby railway siding that paralleled the road.
As I moved among the rows of massive steel boxcars parked on the train tracks, I discovered a larger-than-life specimen book of curious and corroded letterforms. Stenciled onto the sides of the train cars were words and symbols, numbers and safety warnings. They were rusted, repainted, and retouched to create unexpected compositions of type and color. Time and the elements had further worn these letters, and sometimes their messages were cryptic or indecipherable. One boxcar, scrawled with mathematical calculations, had been used as a giant blackboard, perhaps for the trackside reckonings of a brakeman.
. . . More than a hundred years ago, Warner Bailey, a clerk working for the Boston and Maine Railroad, noticed a plethora of lettering styles painted on boxcars. As he traveled throughout the Northeast on business trips, he sketched the various ampersands he saw during his free time. He counted more than 140 type styles, which he meticulously copied into his notebook like an industrial-age scribe.

I would love a glimpse of that notebook of hand-drawn ampersands.
Krayna's article is beautifully written, and the article's pictures are no less beguiling. I'd link to it but, ya know, these were them dark ages. In the meantime, my mind will turn over certain phrases and store them away for future blog titles once I've moved on to my true calling, when typespotting gives way to trainspotting: "Curious and Corroded." "Trackside Reckonings of a Brakeman." And so on, and so on.
Posted by Therese Cox at 12:00 AM

trainspotting. ya know, I can kind of see you rocking it-- walking stick and all.

Occasionally, I become so engaged with the text that I am unable to recall the image of the number - or, indeed, the number.