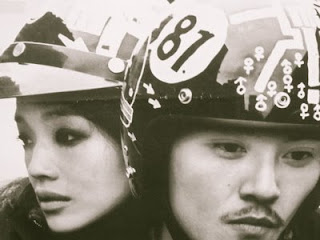 #81, Vienna
A close-up from a film festival ad in Vienna from the summer of 2006. I zoomed in on this handsome couple when I spotted the 81 on the helmet and ever since, this image has occupied a special place in my imagination. I only half-heartedly wonder about the film itself as the story between this couple in my head has since developed into its own narrative. Doomed love + motorcycles + cryptic gender-specific helmet inscriptions + moody black and white imagery = Excuse me, but I think I'll be needing some popcorn for this.
Posted by Therese Cox at 12:00 AM

And why did Ray not comment upon the punctuation of that final sentence?