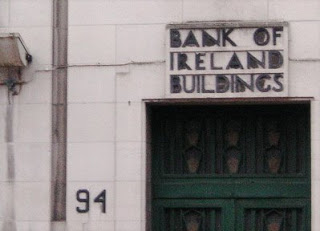 I was going to subvert Chekhov’s famous line (“Medicine is my lawful wife and literature my mistress”) to say that Dublin is my lawful wife and Belfast my mistress. But then I realized it's a much more convoluted relationship than that. Belfast is more than my mistress. Belfast is also my ex, the “it’s complicated” friend, the city I see far less frequently than I’d like, but when we meet again, it’s always a little awkward, a little familiar, and just when things start going good, I have to leave again. And then I realize Dublin is not my lawful wife at all, Brooklyn is, as I will have to report to the IRS very shortly, and so you can see relationship metaphors will only get you so far in life.
You see, I wrote a novel. It’s that famed first novel, the one that sits in a drawer and is read by no one. It sits on a shelf, actually, and it was read by a good number of fine editors at major publishing houses; it was looked at and nibbled on and declared tasty but no one took the big bite. I’m quite at peace with this now because I watch Dylan Moran’s short film on the nasty subject at least once a day. It helps keep the equilibrium as I finish work on the next one. The book-in-progress is set in Dublin; the first was set, in part, in Belfast. I’ve unfinished business with the place and while I don’t know the size or shape of the business, I do know it’s there.
This photograph was taken on an overcast, grey late afternoon in Belfast (is there any other kind?) after I'd spent a good hour or so writing and looking out the window of a coffee shop, admiring through a plate glass window the ghostly behemoth of an Art Deco building that stands guard at the end of Royal Avenue. Ireland’s banks evoke a whole host of feelings these days (see Bock , Sweary ) but on this day, it stood out as a singular beauty, imposing and odd, its streaked white façade and top like a melted-down, digitized Palladian dome. 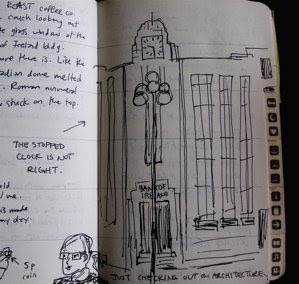 I have, over the years, learned the joys of the fiction writer’s research trip. Its possibilities, whether wandering about with a pocket notebook, whiling away the hours in the streets or away in the pub researching the quality of Guinness while still feeling like you’re getting work done, are endless. The point of all the copious note-taking, presumably, is to gather material for the work you have yet to do. But in the moment, the notes and sketches, the scraps of overheard conversation and street signs, end up creating something almost as satisfying as the finished project.
And while Belfast may conjure certain associations and sights, I can guarantee none of them are quite as bewildering as this . There is glitter and disco and, while I can’t figure out what any of this has to do with the gray, once war-torn city I'm thinking of, a horrible and delightful earworm. You have been warned.
Posted by Therese Cox at 12:00 AM

I have left comments here before, but am not sure you received or viewed them. I love your writing and can't understand why that first book wasn't grabbed up by the publishers. Maybe you just haven't found the right one. Whatever you do, don't stop writing.

Thanks, Anonymous. (It's so fun to say that.) Your words are much appreciated. I hope you continue reading and enjoying my humble ramblings, and I promise to look closely for your comments.

Just think, someday when I break into the fickle world of publishing semi-stardom, you all can smile and say, "Ah yes, I knew her back when she was writing about bricks and staring out windows."

Ha! Great post! I didn't realize that you had a blog too! And the photo has that dark feeling of Irish soul...That's how it feels to me, and that is how I am tied to it as somehow my homeland...Even though I've never been "across the pond."

Gene, you graphomaniac, how many blogs you got? I can't keep up with you!

I spent my career creating. Not with words or paint or musical notes or emulsions on film but with metal and plastic and nuts and bolts to make mechanical things. Most of this came out of my left brain. The supposed logical side. So whenever one of my designs was rejected, it wasn't so bad. Not much heart went into it. I'm wired pretty sensitive. So
when I put my right brain into something and it's refused, my response is much more emotional. Even though I've never had a novel turned down, I know it would rumble my soul. You must have had a bit of the same. I think the secret to acceptance in the creative world is to never give up and make yourself a pest until you're yielded to.
Just keep on keepin' on.

Pierre - that's a really interesting point about left brain projects v. right brain projects. One of the most satisfying jobs I've ever had was working in a book conservation lab, fixing and repairing old books. I was both perpetuating other people's creative works and allowing myself to simply work with my hands. It was a great outlet.

Total indifference, form letters, never getting out of the "slush pile": these things I think are completely soul-crushing. But as long as I was getting detailed rejection letters forwarded to me from my agent, I was like, "Awesome! They're reading it!" Of course, you do it on the hope that someday, you get that one who says Yes. I'm stubborn and hard-working and have a good support network. So in that sense, I'm very lucky. But yeah, you're right. You just have to keep doing it. No matter what. Because you love it. Because you have to.

Thanks for sharing your thoughts on it. And seriously, that Dylan Moran video clip is priceless as a motivator.

Therese,
I do have too many blogs! My personal blog, the one that most fits my personality, or maybe I should say, the artistic me is http://genemyers.blogspot.com If I could only have one blog, that would be it.

I made thejoyoflifeblog.com to support my column at work, and of course, that is a large part of me that I am proud of as well...the happy-go-lucky-mccartney-esk me, crossed with a journalist.

But my spirit always creeps out when singing or listening to singers, hence, thesingersblog.com.
Gene

Diversifying the portfolio, Gene. Good on ya. I will be sure to drop by and visit.