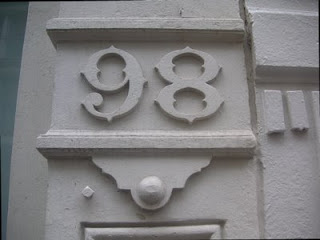 #98, Soho, NYC
About sixty codfish eggs will make a quarter pound of very fizzy jelly. Grumpy wizards make toxic brew for the evil queen and Jack. Sphinx of black quartz, judge my vow. No, Stephen King is not ghostwriting my blog and I haven't been hijacked by spammers. So what gives?
"A quick brown fox jumps over the lazy dog." Maybe this one is more familiar. This sentence, as you may recognize, is an arrangement of letters that includes each of the twenty-six letters of the alphabet at least once. I remember learning it when we were taught the lost art of cursive handwriting in school. Typographers use it as well to show off every serif and flex every muscle of a new font. But they also added a whole host of nonsensical phrases into the mix when I wasn't looking. Ergo, the codfish, evil queen, and black quartz.
Trying to match a vernacular example of type like this beautifully spiked 98 with a modern day counterpart is a little backward. The original was here first. But there's a curious need to know the names for things. City-dwellers and those unused to things like trees may notice this tendency when stolling into a botanical garden. Your eye may be drawn to the flower, but you also find the unstoppable urge to look at the tag to see what it's called. Ah, yes, Myosotis sylvatica, you say, filing this name away the way you would a street sign or name of a restaurant. (Or maybe you just call it by its common name: Forget Me Not.) There's satisfaction in knowing what something is called, even if the flower existed far before the name.

I went font-hunting for this unusual 98 and found a close contender in Retablo. It isn't an exact match (and, for the record, I think the original number I photographed nails it better) but it was still fun to try. For the curious, Identifont is an online source that lets you type in any small sample of text (letters and/or numbers) and see what it would look like in hundreds of different fonts far more exotic than your typical Times New Roman/Helvetica. But you can also try to track down the name of a font by going through a play-by-play questionnaire that helps the very smart computer identify it based on a combination of characteristics. (Is it sans serif or serif? Is it upright or slanted?)
And while you're there, you can also see your new favorite nonsense phrases played out in your font of choice. I, for my part, was very glad to receive news that the new farmhand proves strong but lazy, picking just six quinces. But maybe that's just me.
Posted by Therese Cox at 12:00 AM

Ya know,sometimes I think I'm more interested in learning the name of the thing than the thing itself.

And those sentences with all of the letters are AMAZING. Such progress beyond the ol' fox jumping over the dog.

I used to spend at least one lunch hour per week on Identifont. Such a great resource!

But being the egotist that I am, I just replaced all of the preview text with my own name. Or if I were feeling nostaligic for middle school, with the name of my beloved.

Jackie - I know! Aren't those new sentences a great addition to the canon?

Ray - There must be a name for this: the joy of seeing one's own name or the name of one's crush in a cool font. Viva middle school nostalgia! I'm off to try James McAvoy now.

"The original was here first" brings to mind Sybil Fawlty.