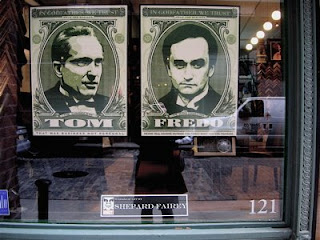 #121, Soho, NYC
For someone with a steel trap mind for details about books, songs, and buildings, I have complete amnesia when it comes to movies. No sooner have I walked out of the theatre than I have all but forgotten what I have just seen. And forget about following complicated plot points. Moving images confuse me. I just go for the dialogue and the popcorn, really.
It's been a long time since I've seen the Godfather, but when I saw these fellas in the window of a custom frame shop, I recognized them instantly. The text above each portrait reads: In Godfather We Trust. I couldn't remember a thing about Tom or Fredo apart from their Sicilian accents and dead-eyed stares, so I brushed up with the Godfather in 1 Minute video, which is worth the watch if only for the "Now take this baby and sprinkle him with water" couplet at 1:51. Soon I was quoting "he sleeps with the fishes" like an old pro.
Godfather or no Godfather, window gazing in Soho is just about as good as it gets. Between galleries and boutiques, every window has its mise-en-scene meticulously sorted out. You feel like you'll get fingerprints on it just by looking. And though some of the brands are the same, it's much more enjoyable than, say, Madison Avenue where all you think of is the money you don't have. Soho retains its downtown vibe, offering a humanizing grit to offset the uber-chic window displays, with cobblestone streets and alleys rife with graffiti and scaffolding and dumpsters. I wouldn't go so far as to say I've seen a horse's head tucked beneath the ramp of a service entrance, but would it surprise me if I did? Of course it would. Severed horse's heads are harsh, even by New York standards.
Posted by Therese Cox at 12:00 AM

It's not the recipient of the horse's head that got the raw end (no pun intended) of the deal. Unseen in the film, is that the torso of the same horse turned up beside another sleeping enemy.

And what's worse, that guy was asleep in a hammock, so you can imagine how cramped it was.

Flann - ewww. But no doubt effective.

Hmm. Those pictures of Tom & Fredo are a bit creepy. As is the idea of finding a severed horse head in one's traverses about NYC....I shall keep my eyes peeled.

One of my favorite quotes is from Godfather:

"Leave the gun. Take the cannoli."

I'd much rather find one of those instead of a horse's head.

You know, Jackie, the fact that you'd have to keep your eyes peeled for a severed horse head in New York - that it might somehow escape detection - points to a larger issue, I think. Just don't think too long about what that issue is.

And Ray, that's awesome. I'd forgotten all about that line. Perhaps a city-wide cannoli-for-guns campaign is just what this city needs. Unless the NYPD, uh, gets to all the cannoli first. It ain't donuts, but you never know...

YOu have to wait until 1:51 for the scene when the title promises it will be over in a minute.