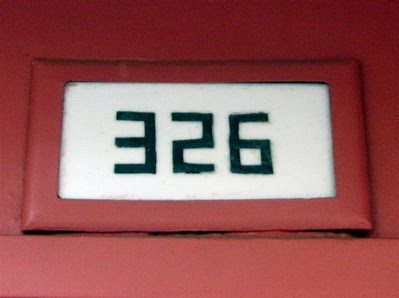 Chelsea, NYC
As we've entered an era where high school kids freely IM their friends during class and five-year-olds are sending text messages while driving, I've been feeling nostalgic for the pen-and-paper, analog ways of yesteryear: the furtive missives scribbled with shiny #2 graphite and folded into taco-shape origami, the tactile thrill of passing a note from one hand to another while "teacher" was coughing up chalk dust in the front of the room. It was so dull during math class and our technology was so poor that my classmates and I, like a cluster of Victorian street urchins rolling a single marble back and forth for sport, would spend entire class periods typing numbers into our calculators that would, when turned upside down, spell words. You started with the simple 14 for "hi," then 07734 for "hello," then the real challenge was to come up with something -- anything -- more salacious than 58008. I don't think we ever succeeded.
Then trigonometry beckoned, graphing calculators elbowed out the four-function ones, and I was forced out of my right-angled thinking and strictly linear word games into worlds of elegant parabolas whose nuances I couldn't comprehend. I can't look at these squared-off typefaces without thinking back to the clunky technologies of my adolescence: the overly sensitive solar panels, green blinking cursors, and mind-numbing pocket games that required one calculator battery and a boredom so complete that you would press a single button one, two, three, fifty times just for the 7734 of it and wouldn't even notice if you were winning or losing.
Posted by Therese Cox at 12:00 AM

This brings back so many happy calculator memories!! (Could this..err..lack of focused attention perhaps have contributed to our leaning toward the humanities?) OR-- was our affinity for creating words out of numbers already indication enough?

Well-written. Fun. And made me smile. What could be better than that?

Happy math memories are indeed hard to come by for the primarily right-brained set, so let's seize 'em if we got 'em.