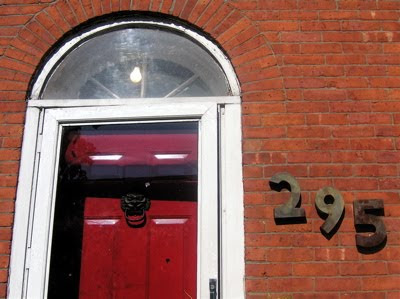 Baltic Street, Brooklyn, 2009
Last year, a reporter from the New York Times contacted me about an article he was writing about house and building numbers in New York City. He was specifically interested in missing building numbers, a task that I, an avid number-noticer, was all too eager to assist him in. I'm rarely asked for my opinion on anything from anyone except for the automated voice message woman from Rite Aid, so I jumped at the chance to share my expertise. Unfortunately, this is me we're talking about. The one who shuns phones, avoids email, and positively takes pride in being on the go and incommunicado. Ergo, my version of "jumping at the chance" was not fast enough. The article had gone up, I'd missed his missive, and I spent the rest of the afternoon mourning my opportunity for my moment in the limelight.
What I would've said if I'd had the chance is hardly revolutionary, but it's an issue that tugs hard on my nostalgia-strings. Missing house numbers are a sad fact of life in New York -- but particularly sad in the case of this building on Baltic Street in Brooklyn. This door underwent a fairly complicated facelift, and while some aspects were improved, the accompanying number, I'm afraid, was not. It's one of many shifts in the neighborhood I've noted. (4 Verandah Place, have I got a jeremiad for you!) The first picture shows what 295 Baltic used to look like. Below is what it looks like now: 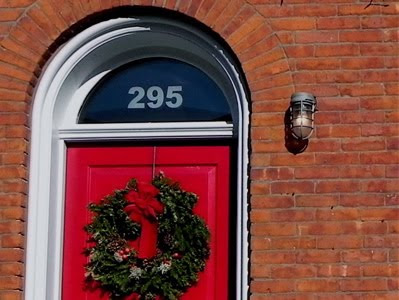 Baltic Street, Brooklyn, 2011
Were the numbers stolen? Replaced? Whatever the case may be, it still saddens me a little to see it missing. Especially since, to the right of the door, you can still spot the pins the 2, 9, and 5 used to hang from.
Posted by Therese Cox at 12:00 AM

It's right near a middle school, so I've wondered if maybe it was part of a kid's lame stunt. Sad if so. More sad if taken down by the owner - those were great #s.