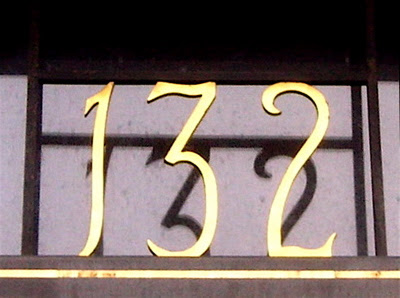 Having just shaken the dirt off my hiking boots after a trek to Iceland -- yes, that is Iceland this time and not Ireland -- I've been reminded how much fun it is to keep travel journals. For someone who loves to sketch, I sure don't do much of it at home. Seems the only time I remember to scribble pictures is when I've got a new Moleskine in my hand and my eyes and ears are roaming some faraway city, taking in its skyscrapers and streets and citizens. At the moment, I'm hard at work glue-sticking bits and bobs into my new Iceland book, but here's one from the archives I thought I'd share since I drew it the same day I snatched this #132.

It was cold January of last year, and I was in the back seat of a taxicab, being whisked up to Drumcondra to meet the writer of several books I admire. It was absolute misery outside and as the car drove north through the slantwise rain, I found myself the captive audience -- emphasis here on captive -- of a typically garrulous Dub who was regaling me with a mini-lesson in criminology. His story involved a psychological study about the motives of some woman's murder, and while it was probably lifted straight from drivetime radio, he reported it with such chilling and loving detail that it was a tad unnerving. I found myself transfixed by the man's tale, though equally eager when the cab pulled up to the Skylon Hotel to pay my fare and tiptoe out with one wary eye over my shoulder. 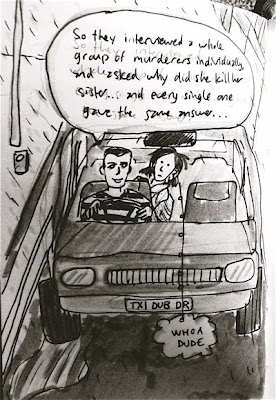 He knew an awful lot about murderers, did this driver.
Posted by Therese Cox at 12:00 AM

At least you were spared the standard 'I fuckin' hate this country, this gubberment, this poxy weather' etc...

Radge - Ah, that's true. Maybe this was to make up for that year when all I got was an earful of "Bertie is a CROOOK!"

Hi Tea! Emily here in San Diego...just discovered your blog and I love it! Lucy (can you believe she's 7?) and I will be visiting New York next week (Sept 1-3) and would love to see you so drop me a line...

Em - Hurrah! You're coming over to the dark coast, mwah ha ha. So good to hear from you, and yes, I am here in NYC and would love to see you. Let's do it!

The Skylon Hotel... is that still alive? It dates from the days when Pan Am existed and pilots smoked Rothmans and Dublin Airport (in Collinstown) had the cleanest lines of any building in Ireland.

And yes to more of your drawings.

Conan - The very one. Whatever about the Skylon, your descriptions have got me pining for the glory days of air travel.