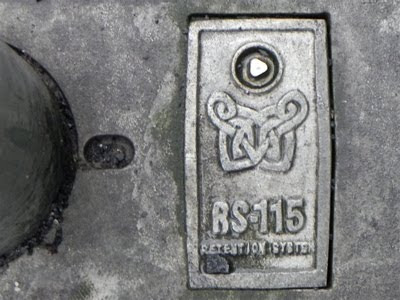 Galway, Ireland
One of the first things I like to do in a foreign country -- after that initial rush of exchange rate hubris has passed and the cash machine has spit out my fresh stack of Monopoly money -- is take in the small details.
I get a lot of pleasure just noting he differences in everyday things: the shape of a faucet or the different melody when the subway doors close. I also like to learn how to ask for basic needs -- food, water, coffee, bookstore, and so on -- and can generally pick up the word for "water" quite easily, which I often learn from looking -- where else? Down. So I have pondered UISCE in Ireland and VODA in the Czech Republic and good old WATER in the U S of A.
Is it time for my annual fawning links to Manhole Covers, Etc. and Sewers of the World, Unite! yet? 'Cause I smell a golden opportunity.
Seriously, y'all. If you're not looking down at the manhole covers, sewer caps, and other distracting sidewalk shiny things of your city or the places you travel, you're missing out on something special. Consider this #115. The ornate and suggestively Celtic design on something as quotidian as a water retention system cap tells us something about how those Galwegians take pride in their city. It's sure as heck the prettiest retention system cap I've ever had the privilege to trip over while wondering if I'm supposed to LOOK RIGHT or LOOK LEFT when I'm crossing the street. And the fact that it goes unnoticed by most? That just adds to the charm. (Present company excluded, naturally.)
It's a common misconception that tourists only look up when walking through the cavernous streets of an unknown city. Oh no. When it comes to scouring a new metropolis, we sewer lovers of the world (who have never, as far as I know, willingly united in any place other than the internet) know the treasures are often hidden closer to street level. We will look down, around, under lampposts, and behind fences for treasure, crouching in alleys and kneeling in supplication before the asphalt gods for a closer look. We will annoy you as we block the crosswalks to take photographs of, what, our feet? A crushed Coke can in the gutter? We also will come for your children, but that's not till the zombie sequel film.
And whether you like to look up, down, sideways, or backwards, one thing remains clear: sometimes it's not such a bad thing to be a tourist in your own town.
Posted by Therese Cox at 12:00 AM

As a street furniture ponderer since my youth I have to agree with you entirely. Dublin's coal hole covers are worth a week's exploration.

I'd very much like to see one of those guided troupes of tourists walking around without ever lifting their eyes from the pavements.

A fine idea. Why do the Pat Liddy walking tour when you can take the Coal Hole Cover Tour? This might be just the thing to put the zing back into the economy.