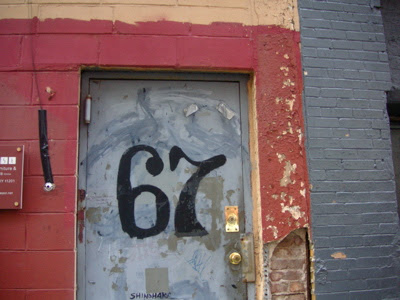 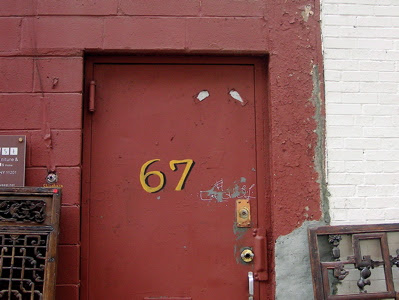 Jay Street, Brooklyn, 2011
Today's &7 Extreme Makeover takes us to DUMBO, that gritty hipster-magnet 'hood with the ponderous acronym. DUMBO happens to be home to Saltmines, where I've spent many a night stomping about and making noise in the Balthrop, Alabama rehearsal space. There's also Saltlands studio, where we like to go when we feel like eating bags of cookies, then having someone hit "record" and twiddle some knobs to make us sound good. This 67 is just across the street from the space, so I've spent a good amount of time gazing out at it during breaks as if I were a weathered cowboy squinting off in the sunset.
It's rare that you'll see one unique, hand-painted number painted over to make for a different unique, hand-painted number -- generally, twee little arts-and-crafty things are painted over to make way for Big Ugly Mass-Produced Manufacturing stuff -- but that's exactly what went down here. Then again, it's a strange place, given to artistic shifts. I haven't quite parsed the meaning of the myriad objects I see on display around this building near the waterfront -- one appears to be some kind of chihuahua shrine, if that gives you some idea. I do know that 67 used to be the home of Jay East, an Asian antiques and collectibles store, before high rent shut it down.
So what's the verdict on the change? I don't like to play favorites with my subjects (all right, I do), but I have to say, my loyalties rest with the original 67. Those jaunty serifs, that boastful I'm-bigger-than-a-venti posturing, that lovable combo of peeling paint chips -- it's a great look.
And speaking of the band, guess who's gearing up to hit the road again? The van is packed and my band mates have already heaved off, but I'll be joining them in Jacksonville for a stretch of beautiful autumn days of music-making and air mattress surfing. Florida, Georgia, Alabama, Kentucky, Ohio, Pennsylvania: If you know what's good for you, keep your numbers locked up at home. It's open season, and the bounty hunter will be after 'em.
Posted by Therese Cox at 12:00 AM

Yup, I prefer the cartoon deco of the earlier picture.


I am very curious about the two patches on the door - above the number to the right - that are immune to paint, despite the makeover.

Conan - I believe a vampire tried to eat the door. But I haven't been able to confirm this as fact.

And thanks for the good wishes. Road-time is fun-time.