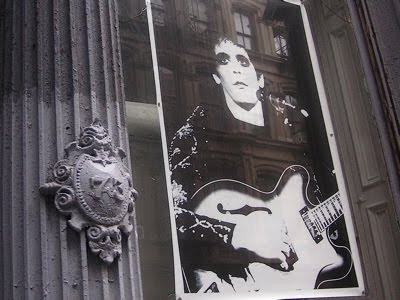 Soho, NYC
It's practically a law of science that those used "HELLO MY NAME IS" stickers never seem to end up in the trash where they belong. There they are, completely useless now that the meeting is adjourned, the crappy Au Bon Pain coffee has been drunk, and the mingling with insufferable colleagues is a thing of the past. What's a worn-out sticker to do but affix itself to random inappropriate surfaces? I've seen them all over the city on desks, traffic light posts, mailboxes, and sidewalks, you name it. Mostly, it's litter and I find it merely irritating. But I confess there is one I have developed a soft spot for.
On a traffic light near Chelsea Piers, there is a crosswalk signal along the West Side Highway that bears this mysterious instruction, courtesy a used sticker: TO CROSS STREET, PUSH LOU REED AND WAIT FOR SIGNAL.
It's a long traffic light, so I have plenty of time to contemplate it every week, so much so that it has almost taken on some religious, Zen-like quality, a koan if you will. It never fails to elicit a smile. Up till now I haven't seen anyone obey the sign, but surely it's only a matter of time? If Lou Reed is pushed onto the West Side Highway and no one sees it, does it make a sound?
Posted by Therese Cox at 12:00 AM

Funny! I wonder if Lou Reed knows how epic the placement of his sticker was.

And: Insufferable colleagues! I can think of ONE person who it might be fun to sip Au Bon Pain coffee with.... right, right?

Lou Reed is probably too busy making albums with Metallica to notice.