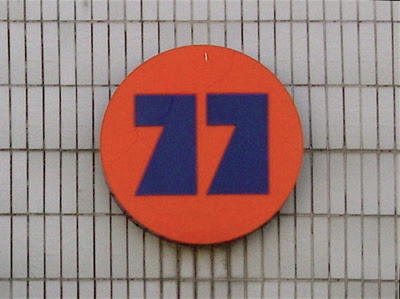 Smithfield, Dublin
The iconography of this may not resonate in the same way with my Dublin friends, but to my American eye, this 77 immediately stood out. With its bright red-orange circle and cobalt numbers, it's a dead ringer for the Union 76 logo. Where I grew up, this giant orange orb at gas stations was as unmistakable an image as fast food's golden arches, a familiar and well-loved sight on road trips. (The best of them actually lit up and rotated.)
This was real ooh-ahh 1962 World's Fair technology, state-of-the-art stuff back then, and why anyone in the year 2011 still gets excited about a giant rotating orange ball is a little puzzling. But apparently I'm not alone. There's enough of a cult following that a "Save the 76 Ball" campaign made sure that ConocoPhillips (as they are now re-branded) donated a couple to museums. They even put up a few new rotating balls to wow the oh-so-jaded public -- who, frankly, are probably more concerned with paying 4 dollars a gallon for gas than they are about "saving" some dinky old orange sign.
I like this one quite a bit. It's like if the Union 76 logo ate a Pac Man, went to Smithfield, and found a nice, industrial gray wall to settle down with. I wish it luck in its future endeavors. Should anyone ever want to tear it down, they'll face some stiff opposition from the "Save the 77 Ball" campaign. While I probably won't get the Irish Georgian Society behind me, I can probably pull a couple strings at An Taisce. Those folks will object to anything.
Posted by Therese Cox at 12:00 AM

On the subject of Smithfield, that place creeps the fuck out of me. I was there only last night with herself - the place just smells like recession.

I detect a smash hit: "Smells Like Dead Celtic Tiger." Vacant squares, whiskey distillery, kids from juvie (y'all don't call it juvie though, do you?) hanging out with their solicitors. Entertain us!

On a happier note, I hope your move went/is going well. Will be checking in eagerly for updates.

Thanks! It's happening at the end of the month. Must start packing. And get blogging.