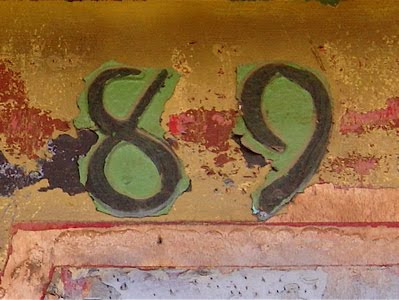 Oklahoma City, OK
My first photo from Oklahoma, y'all. I haven't given this state much love, but it's time to change all that. Who cares that neighboring Texas is home to the Largest Cross in the Western Hemisphere? Oklahoma is home to the tallest spiral slide in America. And since it's AMERICA, that's real BIG.
But enough bragging. This brightly colored 89 comes from outside The Conservatory, this fun dive bar venue in Oklahoma City where we played on tour a couple of summers back and I think I lost about 8 decibels of hearing. (Give me a shout if they happen to turn up.) I do remember feeling pretty thrilled that outside the club, sandwiched in between Fox Valley Motors and the record shop, there it was on a rickety cracked sign for the club: our name in lights! Well worth it after driving past endless signs for hardware, liquor, and loans.
As for the record shop employees next door, all I can say is this: the kids are all right. I picked up a nice stack of Handsome Family, The Fall, and Kurt Weill CDs at The Conservatory, which is the last time I think I've done such an old-fashioned thing. Oklahoma brought that out in me, I guess.
My notes from our gig at The Conservatory are pretty brief, but I think you'll get the idea: "Venue a big concrete box w/ bright graffiti outside. Cheap theatre seats inside, a bar behind velvet rope, no soap in the bathrooms and free beer." Smells like tour to me.
Posted by Therese Cox at 12:00 AM

All day now, I'm going to be singing about how every night my honey lamb and I sit alone and talk and watch a hawk making lazy circles in the sky.

Jackie - I told you the cure for that, right? The ultimate palette-cleanser when you can't get a song out of your head is J. Geils Band's "Centerfold."

Only flaw in the system is, I haven't figured out what song you then use to get "Centerfold" out of your head.

Better work on that.