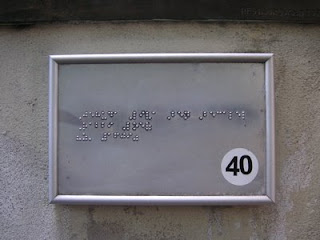 #40, Stary zidovsky hrbitov, Prague
Braille in public space and architecture is usually limited to the pragmatic: it's there on signs and labels to give instructions to the blind or visually impaired. Braille is something most of us encounter every day of our lives but rarely see: inside elevators, along corridors in hotels, on vending machines and inside public bathrooms. If we do ever engage in any discourse about it, it generally doesn't extend beyond the "Hey, did you ever wonder why drive-through ATMs have Braille?" variety. (The Straight Dope, as always, has the answer here.) In a weird reversal, we are the blind ones when it comes to understanding Braille. It clearly has its uses, but it also has possibilities. Why should Braille be limited to purely practical purposes? Could it also be art?
In late August of 2007, an artist named Scott Wayne Indiana framed this question into a mission. He began sticking strips of specially printed paper dubbed "Braille Graffiti" throughout the streets of Portland: on electrical boxes, along railings in music stores, above windowsills. The messages in Braille were not room numbers or instructions but philosophical tidbits. One read: "You don't have to be blind to see that the writing is on the wall". The artist explained his project was "an attempt to create a unique moment for a blind person who might happen across one of these bits of graffiti." You can watch a brief clip of the project here.
In France, a street artist named the Blind has taken it to the next level, making his own mark with Braille graffiti. His starkly beautiful creations, first sprayed onto walls with the aid of a stencil then finished off with rounded white 3-D half spheres roughly the size of half a golf ball, have popped up in highly public places, a la Banksy, on city walls, pedestals of monuments and outside the Palais de Justice. They evoke an immediate reaction as works of art. The white Braille, clean and perfectly aligned, has a cool, modernist look against the weathered classical architecture of Paris. But the longer you look at them -- and this may be the point -- the more you begin to wonder what they mean.
With the aid of a good Braille directory (provided on the Blind's home page), I did eventually puzzle out a few of his pieces, though the process of translating Braille to French, then French to English, was so time-consuming and frustrating that I walked away from the exercise with a headache and only a few fragments of words. But more than that, I came to a much deeper appreciation of the resourcefulness of anyone who has ever, out of necessity or out of a desire to help others, had to learn how to read not with one's eyes but one's hands. Ouvrez les yeux, reads one line of the Blind's graffiti beneath a statue in Paris. We might yet benefit to try to see things from his point of view.
So much for art. Next, I'd love to see how Braille can be worked into architecture.
Posted by Therese Cox at 12:00 AM

Something about Braille has always reminded me of the miniseries V--you know, the one where reptilian aliens come to Earth and masquerade as friendly humans in some quasi-coherent statement about the insidious power of Hitler's Germany?

Anyway, they had a logo on their uniforms that looked like Braille, as did most of their written language as evidenced on command consoles and whatnot.

Not that I am comparing blind persons with reptilian aliens, mind you. I'm fascinated by its "alien" quality, though, as the dots do not form letters or ideograms that would be recognizable to the sighted.

It IS a very alien alphabet. I'm sure people much smarter than yours truly have figured out why Braille works, but I still scratch my head and wonder why they don't just use the regular alphabet and numbers in bas-relief. I suppose that's just a sighted person's limited logic, working backwards from my own repertoire.

Did not know "dystopian". Confused it with "diplopia".