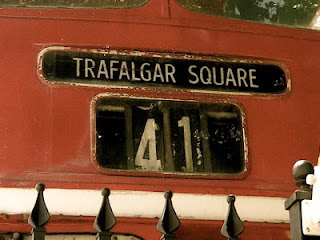 #41, Asheville, North Carolina
Planes, trains, and buses aren't known for their mouth-watering culinary offerings. If for any reason you need more evidence to brown bag it on your next trip, read this brilliantly bewildered missive to Virgin Airways, a complaint letter so detailed and full of suspense it is raised to the level of literature. Most of us, though, know from first-hand experience not to expect to be anything but jostled from a journey by plane, rail or bus. Finding food and fuel was foremost on my mind on that June day when I first stepped into the streets of Asheville. I was fresh from a four-hour drive in a cargo van. I had eaten nothing for days but trail mix and cheese grits. So when I noticed that a bright red British double decker bus had somehow made its way, intact, across the Atlantic and claimed to be serving food right there in Asheville, North Carolina, I had to suspend my disbelief and give it a closer look.
The Double Decker Coffee Company is exactly what it sounds like: a coffee shop housed inside a double decker bus. The bus, a Route 41 gone horribly astray in its journey from Trafalgar Square to Tottenham Hale Station, is now permanently parked at 41 Biltmore Avenue. You can climb on board any time the door's open and stay as long as you like. It won't take you anywhere near Trafalgar Square, but it will serve you a good strong cup of coffee and a slice of pumpkin bread. Downstairs, the interior has had a few alterations, but you may need to mind your head as you prop yourself up on a stool. It's fun to think of a permanently parked bus as architecture, even though it looks like it might yet break through the wrought iron fence and go galumphing off into that good night. Can buildings be buildings if they're also on wheels? This bus blurs the line, and unlike the red booths outside Telephone Bar & Grill in Manhattan, you can actually enjoy your bit of Brit kitsch from the inside. Brill.
Posted by Therese Cox at 12:00 AM

Your story reminds me of The Old Spaghetti Factory in Portland, Oregon. It houses one of the original trollys that ran through the city. You can have your Italian dinner within the trolly although not much remains of the original.
I used to travel in one as a small child with my mother when she went on one of her shopping expeditions.
I also played on an extremely large steam engine stored on a sideline near Oaks Park. Nothing to eat though unless you brought your lunch. The engine was later refurbished and pulled the Freedom Train.
The Bomber Restaurant sits along the highway between Milwaukie and Oregon City. There you will see a B17 flying Fortress perched above the parking lot. The plane was at one time hovering over pumps since it was a gas station and the inside was accessible. It is now off limits and the station is closed. A drive-in eatery was also there but morphed into your basic restaurant. The web site is www.thebomber.com.
Anyway, so much for my stories of planes, trains and trollys.

I dunno about that letter...a guy who can't tell his dessert from a desert neither inspires empathy nor admiration of writing skill. Somebody should ship him a boatload of commas, also. Maybe Branson can spring for that.

Fair point, Ray. Perhaps he was too traumatized by the mustard?

Pierre, those are great stories. Was the steam engine there as an attraction or was it just an old thing that kids decided to climb on? While I admire the inventiveness of re-purposing old pieces of transport, it seems too much refurbishing or too much of a theme park atmosphere can completely destroy what made it attractive in the first place. Thanks for those descriptions.

Therese,
You can see images of the engine at: http://www.freedomtrain.org/html/
aft_consist_4449_today.htm
Sorry,I don't know how to create a link.
The first photo shows it parked on it's sideline as I remember it and where I played as a child. The others show it as refurbished.