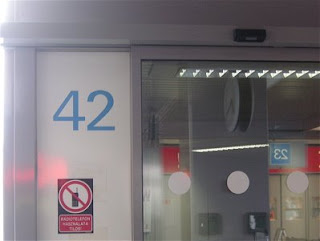 #42, Ferihegyi Nemzetközi Repülőtér, Budapest
Yes, that's all a very fancy way of saying "the airport" but let's face it: with little to distinguish this image from the thousands of other airports in the world just like it, we could all do with a handful of umlauts.
I've been reading architecture critic Witold Rybczynski's collection of essays Looking Around. He's got a great bit on airports where he describes perfectly the abhorrence we feel at the prospect of a too-long layover:

Like most people, I dislike airports. I am either walking too far or sitting too long. The food is bad, the chairs are uncomfortable, and the irritating public-address system squawks unintelligibly. The tired potted plants do little to dispel the obsessively mechanical atmosphere. Above all, there is the dispiriting feeling of inactivity reflected in the weary faces of my fellow passengers, for whom ennui has replaced anticipation. They are just as torpid as I am. If Fritz Lang's Metropolis showed the underground city of the enslaved workers as a kind of hell, then the airport waiting room could serve as a convincing vision of purgatory.

But then this was written about ten years ago, before the advent of iPods and text messaging and any other manner of Crackberrying, which now, of course, have replaced any outward appearance of ennui in our fellow passengers. Everyone is continually otherwise engaged. You may see a lot of indifferent faces and bad moods, but you have to go a long way to find torpid. I do on occasion plug into my tunes, but I do still try to dabble in the tried and true airport layover pastimes: listless magazine flipping, wandering between newsstands comparing snack mixes, spritzing perfumes and sampling whiskeys in the duty free, and best of all, people watching. You know, like looking for men in gabardine suits with cameras in their bow ties? Ah, the good old days of low-fi, DIY purgatory.
Posted by Therese Cox at 12:00 AM

I will always think of it as Hi-Fi. I spent hours listening to Simon and Garfunkle and didn't feel uncomfortable at all. However, when I pumped my first CD player through my stereo, I realized that it wasn't very Hi at all. I now consider it to be
Higher-Fi.

I don't know if this makes me hi- or lo- or just a Luddite. All I know is, I uttered the word "Walkman" in front of a class a few months ago and was met with blank stares.

Ageing does it every time.