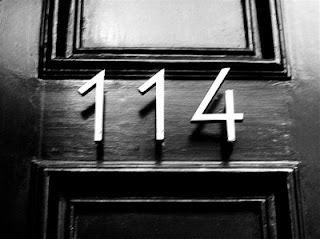 #114, East Village, NYC
It's about time I showed EVil some love. No, I don't mean the opposite of good, I'm talking about the East Village. You'd think with all the asinine nicknames cooked up over the years for New York or Brooklyn 'hoods that EVil would have caught on earlier. No, instead we are subject to anxious realtors foisting BoCoCa on us, which you can certainly say ten times fast faster than "Boerum Hill, Cobble Hill, Carroll Gardens," but what was wrong with just calling a garden a garden? On second thought, I'll retract my suggestion. It's a small step from EVil to WeVil (the West Village), to NoCanWeWeBroad (North of Canal Street, West of West Broadway), and Hell'sea (the zone between Hell's Kitchen and Chelsea). Better to nip it in the bud before anyone starts getting any more zany ideas.
When I first moved to the city eight years ago, I spent most of my time wandering and exploring the East Village: the Den at Two Boots on Avenue A, KGB bar on East 4th, A Salt and Battery (the chipper with an atmosphere oddly like a lonely high school cafeteria), and the various Irish pubs near the photography studio where I worked as a desk girl, greeting vapid models and making kick-ass cappuccinos for the Italian photographers. The grid layout and numbered street names made it easy for a newcomer to get around, and I loved taking it all in: the noise from the basketball courts, the decaying building facades (Dude, that Led Zeppelin cover was shot here!), the surprise of finding a used book store or tea salon on one of the unassuming blocks.
This 114 is pretty uncharacteristic of the more worn, do-it-yourself aesthetic found in the East Village, so the sharp, pristine shapes caught my eye immediately. The numbers seem to hover in mid-air, shadows clinging to the dark door behind it, like a well-heeled stranger clutching her handbag or his briefcase a little tighter upon discovering they've ventured into the wrong neighborhood. But you just feel like clamping a hand on that stranger's shoulder and saying, "Hey Buddy/Hey Lady, relax. No one's gonna swipe your stuff. No one's even looking at you." Except this is a number. And of course, I'm always looking.
Posted by Therese Cox at 12:00 AM

Hey Therese, one thing I've never gathered from your posts: are you an Irish woman living in the US, or were you an American one-time living in Ireland? Or am I way off base and you're off Tibetan Sherpa stock?

Completely American, Flann. Born, bred, and corn-fed in the Midwest, raised on a steady diet of travel and road trips, then went to Ireland when I was 19 and haven't stopped going back. I lived there only briefly but spend a good deal of time flying back and forth. Customs officers love me.

And the album cover's Physical Graffiti, shot on St. Mark's Place in the East Village. The actual 5-story building was chopped to a 4-story building to fit the album, tho. It's still there and there is (of course) a used clothing shop on the ground floor called "Physical Graffiti." You have to weave through a throng of tattooed teenagers to get to it, but otherwise it's an enjoyable block.

I live in Phoenix, Arid-zona. It's very dry in esthetics. Houses here, aged ten or younger, all are painted in the same shades of beigh or coral and have tile roofs. The HOA makes it so. Size and shape are the only variables. In order to give people a sense of identity, developers give colorful names to housing areas, Sonoran Mountain, Stetson Valley, and Legacy at Boulder Mountain. I live on an island in the suburban sea called Entrada. Do I feel identified! Street names are special as well; Saddlehorn, Desparado, and Gold Mountain Pass which is a dead end street. It's all still pretty bland. I miss the rain and green of the Pacific Northwest and Portland's beauty. I hope to visit NY this year. Lots of history, character and eye candy there.

1) "pristine" (you're welcome)
2) I love these numbers! They're so angular and serious. They're what I wish I were like (as opposed to the recent question of which numbers we're actually like).
3) WVW = chomflan: v. to invent fake words based on the grammatical and syntactical rules you already know

114 is my favourite number, and this pic does it justice! I was waiting patiently for it, but didn't want to jinx it by mentioning it in advance.

When, next year, you do your Lateral Thinking Numbers blog, this number should be illustrated by two cans of Heinz beans. Or Paul Hardcastle holding a hexagon.

I used to live in EVil back in the day-- in a duplex apartment with three other girls. The apartment had a strange, twisty iron staircase in the kitchen that led downstairs to my bedroom- which was 5x6. Literally. Couldn't fit a box spring in there with my mattress so I had to balance my mattress on wood slats and there was a giant, enigmatic, invincible, Kafkaesque cockroach in my closet whom I called Gregor.

That #114 does indeed seem a bit pristine for the East Village. Do you know what street this is?

This is great, everyone. I haven't seen so many people lined up with things to say since the last time I was near the customer complaint desk of RyanAir.

Pierre - I hear ya. The whole deliberately misleading name issue is one that deserves its own post. Gold Mountain Pass as a dead end street. Sheesh.

Ray - Thank you. Well spotted - and now fixed. And keep the chomflam coming.

Robt - Oh dear. First the grammarians, now the mathematicians. ; ) You might have to offer some Lateral Thinking tutorials, as I am Discursive Thinking only. And what a surprise - I had no idea 114 was your favorite. I'm so glad you like it!

Jackie - I think I know that Gregor. Or maybe his cousin. This is on E. 10th Street. Say hello next time you're down that way!

Greensboro - Surely I could spend days pondering your excellent inquiries, but for the sake of brevity, I'll offer the first ones that come in my head, which are not the same ones I'll have tomorrow.

Fave #: 13
Fave font: Lucida Blackletter (not your everyday font, to be sure) for effect, Hoefler text for writing
Fave word: nefarious

So what is holding the numbers out from the door?

Nice set of numbers, I agree.