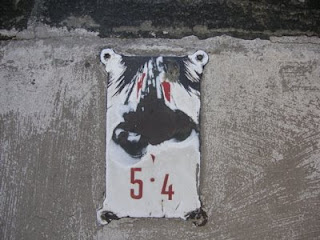 
Ampersand Seven documents an ongoing project that involves the hunting and gathering of numbers found in architecture and urban environments. It is the sometimes-accidental, sometimes-on-purpose record of cities I have explored and numbers I have noticed along the way. It is the product of one curious and obsessive brain; it is an homage to unexpected beauty; it is a place to revel in odd juxtapositions of text and image; it is a visual map of places I have been and a reason for having more places to go.

Starting in 2009, I will post one photograph a day for a calendar year, starting with one on January 1st and proceeding in sequential order up to 365. Cities that serve as a backdrop will include Brussels, Budapest, Chicago, Dublin, New York, Prague, Rome, Vienna and a few more places in between. The daily nature of the postings will allow me to create both an album and a travelogue, a place to share pictures along with occasional stories or associations that these numbers inspire. You can view it as a daily slide show, a number-a-day treat, or just drop by from time to time to see what's new.

Also, I invite your comments if an image or number evokes a particular memory, observation, or any musings you may have on travel, architecture, cities, or space. Walk around. Pay attention. See you in January.
PROJECT UPDATE: After a year of digressions and diversions, 365 numbers in 365 days will be back on track, beginning January 1, 2011. See you in the new year!
Posted by Therese Cox at 12:00 AM No comments: