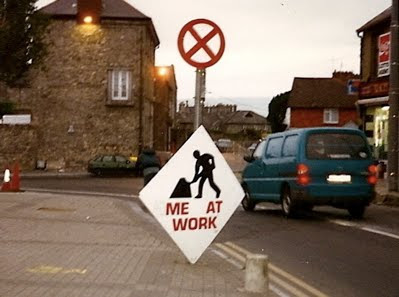 Dublin, 1996
A few years ago, I talking with a friend of mine in Dublin about all the changes that had gone on in his city over the past ten or fifteen years. As an unabashed architecture rubbernecker and perpetual cranespotter, I was curious to see what he thought of all the new buildings and developments that had sprung up. Some of the new neighbors have been more obvious than others: a massive shiny syringe millennium spire (arrived on the scene three years late), a handful of new modern bridges named after old modernist writers, and not least of the bunch, the slinky silvery transport of the Luas.
The Luas (the name translates as "speed") is a tram system put in back in 2004 that seemed, when I first saw its network of complicated tracks and overhead wires, both remarkably new and like some kind of throwback to the Dublin James Joyce wrote about, the kind of old-fashioned tram that a spinster could've left a cake on while a randy old colonel winked at her, albeit with a sleeker new design and a few more Ben & Jerry's ads ("Flavor on the Luas") pasted to the windows. It also was built without an interconnector linking the two routes, an oversight which would infuriate if it didn't now seem like a remarkable symbol of Celtic Tiger Ireland: the end result of half-arsed planning, visionary enthusiasm, and an influx of magical cash that, it turns out, wasn't even real.
Route-wise, I could've really benefitted from the Luas when I lived in Ranelagh in 1999, though how else would I have traipsed through the south side, scorning the bad bus service, listening to Tori Amos on my Walkman, developing my as-yet-unrealized role as a flâneur and unsung urbanist? The sight of this new tram snaking around O'Connell Street, silent as an assassin, first surprised me when I returned to Dublin after a few years away. But a little light rail, especially in a traffic-strangled city like Dublin, is good for all. When it's not busy smashing itself into number 16 double decker buses, it's even a pleasant way to get around the city.
The Luas, like the spire, ended up taking much longer than planned. It was but a twinkle in a transport planner's eye in the nineties when I lived there, but by the time I was getting kicked out of the country by the authorities, work was already underway to start the two lines.
My friend, who we'll keep nameless, told me how he'd been hired to do some surveying work on the project early on. The job required him to show up at Heuston Station each morning to collect a hi-vis jacket and theodolite from an architect, then go about the rest of the day from house to house measuring the distance from sea level. It wasn't back-breaking work, he reported, and was made easier by frequent breaks for frisbee in St Stephen's Green and a few rounds of snooker at Big Al's Pool Hall. The task was so easy, in fact, that he managed to tally an entire month's worth of measurements in one day, just in time for the deadline. "And people wonder why the Luas took so long," he conceded, before asking if I fancied another Guinness.
So much for speed.
It goes without saying that things have been quiet over here in Ampersand Land, and while I'll steer clear of the actual hand-wringing (a bad habit that makes me look even more like a character out of Dostoevsky than I already do), I do feel obliged to send up a flare every now and then to let y'all know that I'm still here and still working. Collecting numbers and pictures is a bit like collecting data, though more colorful and less requiring of accuracy than figures on a clipboard. The site is quiet, but the library is growing. I'm in a gathering phase now, enjoying the leisurely pace while most of my creative output is pouring into playing snooker drinking Guinness working on my novel and preparing for tour. But I know there are a handful of you out there who check in from time to time, and I haven't forgotten.
Posting may be light for awhile, but we'll see if some time spent in cooler climates over the next few weeks doesn't do some work toward jump-starting my brain. And those who read about my experience with the Envy-on-Wye literary festival may be happy to hear that I exorcised some of that envy by taking part in this year's Bloomsday festivities in New York a few weeks ago. Sheila, who was there in full force and wrote up a wonderful account of the day's geeky adventures, even joined me in volunteering to read a passage from Ulysses. One thing I can say, it's that when Colum McCann asks you to do something, you can only say Yes.
Posted by Therese Cox at 1:00 PM 7 comments: 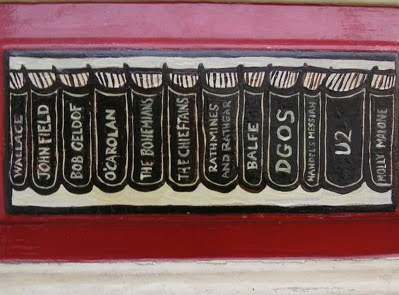 Merrion Square, Dublin
It would appear by reports from the front lines that the summer book festival season is upon us -- and by us I mean everyone in English-speaking countries not bordered by the nice Canadians. Yes, I'm looking at all you lucky louts in the UK who got to luxuriate in the Hay-on-Wye Festival over the past weekend, and ahem, I'm glaring covetously at you, too, Dublin Writers Festival, which is carrying on right now this week without me, thanks very much. Those with even the slightest bit of &7 awareness will know the blind excitement the words Dublin, writers, and festival can incite in me (well, maybe not festival -- let's not get carried away), and it doesn't help that I'm on the wrong side of the ocean, roistering in an over-heated Brooklyn apartment while Writer O'This and Scribbler McThat are spilling hilarious anecdotes about their craft to a captive, Guinness-infused, story-loving audience.
I mean, you may as well say, "Welcome to the Envy-on-Wye Book Festival, Therese. Today we'll be offering free single malt scotch and unlimited cotton candy. There's a charming little spot in the shade where you can chortle over the latest Bill Bryson book and afterward you can hang out and enjoy a rousing round of darts with Stephen Fry. Oh, and over in the corner we've set up a private booth where James McAvoy will be reading to you from the Complete Works of W.B. Yeats, starting in five minutes with 'An Irish Airman Foresees His Death'. Right! Any questions?"
Yes, I do enjoy a good book festival. Brooklyn, of course, is not exactly a stranger to the book festival circuit, and I have to say they do a nice job each year of gathering a fantastic panel of writers to read and entertain. But after flipping through the Guardian's "Hay Special" edition of G2 (I did quite enjoy Decca Aitkenhead's Confessions of a first-time festival goer), I have to say that nothing here even comes close. Call me a hopeless romantic, but I'd love to shuffle off to a charming B&B after a day of readings rather than realizing I've been sitting for the past hour outside the Supreme Court building on a patch of grass marked with a Rodenticide label. Too much to ask? Maybe.
So if you're one of the lucky few who made it to Hay, or are around this week for the Dublin Writers Festival, do send my regards. And make sure to check out the insanely talented Paul Murray on June 5th. I'll be here, crying into my Laphroaig and watching Atonement for the fifth, no sixth, time. I do hope you're satisfied.
Posted by Therese Cox at 12:00 AM 3 comments: