Right. So I pretty much the entire reason I started up the number line again was so I could brag about this absolute beauty, a graphic white #276 on a toothy blue circle saw. I'm always on the lookout for hand-lettered type in the city, and this one is both attentive to detail and quirky. There are still scores of great hand-painted hardware and lumber signs around New York, though you usually have to travel off the main drag to spot them. Here's a look at some of the rest of the sign: 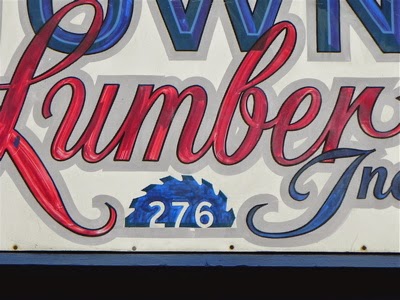 The whole look is idiosyncratic yet carefully crafted. I love the faint gray shadow around the lettering and the fact that the spiked back of the saw almost makes it look like a porcupine. An &7 favorite to be sure. I hope you enjoy it as much as I do.
Posted by Therese Cox at 12:00 AM No comments:

It's roughly the size of a bottle cap, sits at shin level, and was almost lost amid the swirl of eye candy on a busy, mosaic-clad street pole, but somehow this 282 got my attention. I found it years ago while waiting on the traffic island close to the giant rotating Astor Place cube where all the disaffected youth mope, and I doubt I'd have noticed the tiny number it if it weren't for the traffic light holding me up. Traipsing up and down Manhattan's sequential grid is one sure-fire way to find numbers, but it's the unexpected catch like this one that keeps things fresh.

If you've ever taken a stroll through the East Village, then you're probably already familiar with the artwork of Jim "Mosaic Man" Power. Maybe you've stumbled upon one of these colorful lamp post mosaics, too, noticing a sudden patch of beauty in the middle of a harried, ugly commute. Power, a Vietnam veteran and much-loved figure in the Village, has been steadily beautifying his 'hood shard by shard for over twenty-five years. The bits of colored glass, plates, mesh, marbles, and whatnot are part of the neighborhood street furniture. He's decorated close to a hundred street poles with his vibrant mosaics along a two mile stretch. But the last few years have seen these pieces endangered.

With the proposed so-called sleek redesign of Astor Place that included the removal some of his poles, Power began dismantling some of his own artworks out of protest. But community efforts to save his work sprang up. It's a conservation effort well worth it. Shards of mirrors, chunks of ceramics, wild patterns, and colorful lettering: once you start noticing his pieces, they're impossible to miss. And it's impossible to imagine the East Village without them.

Photographer Lara Elmayan at Untapped Cities has done a noble job of documenting Powers' work in its entirety, and you can read more about Power and the mosaic trail here. But the best way to see his stuff? Take a walk.
Posted by Therese Cox at 12:00 AM No comments:

284 Van Brunt Street is not only home to today's catch, it's also home to the Red Hook Lobster Pound, a place I like to call the jewel in my neighborhood's claw. Temporarily closed, the Pound's shutters are expected to roll up on April 1st, and you'd better believe there'll be no April foolin' once they do. A bike ride, a lobster roll, and a good book on Valentino Pier is the surefire first sign of spring. I can taste it already.
Posted by Therese Cox at 12:00 AM No comments:

Like yesterday's #286, this three-digit span belongs to a longer sequence of numbers, chopped off for the sake of convenience (and leaving me with the nagging feeling like I'm somehow cutting corners by, well, cutting corners). But the framing of the 285 inside of the bicycle wheel makes this one's charm pretty irresistible.
Posted by Therese Cox at 12:00 AM No comments:

This is an oldie but goodie from the collection, gathered on the road with Balthrop, Alabama a few summers ago. Of course, to make this true to its Portlandia title, I feel like I'd have to add something to this image, something that's . . . missing. I know! Put a bird on it!
Posted by Therese Cox at 12:00 AM No comments:

There's something very satisfying about tracing the long arc of the North Circular Road. Cycling along it, you can fall into a comforting rhythm, almost like you're following a massive Olympic track. Walking, I always feel more at a remove from my surroundings, though these numbers hand-painted onto the low walls give me a sense I'm making some sort of progress. In shape and size, the black numbers on white remind me quite a bit of the curbside numbering of my hometown streets growing up. The steady presence of these numbers provides a way of orienting myself to the street, and the small variations that come with each hand-painted marker lend each one its own personality. 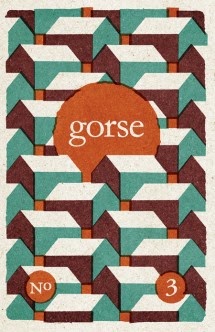 Until I find a way to make wandering the streets of Dublin my full-time occupation -- and believe me, I'm working on it -- I've got to settle for these small projects: collecting numbers, drawing maps, and scribbling what I see. It's an obsession that's been with me for years, and I'm happy to say that an essay I wrote, "A Writer's Guide to the Dialectical Landscapes of Dublin," is going to be published this month in gorse journal, issue no. 3. You can read a very short excerpt of the essay now, and though the issue is officially being published on March 23rd, you can pre-order copies of the journal. It's as stunning a book as you could want: attractive, compact, and brimming with sharp, beautiful new writing from Ireland and outside: essays, fiction, poetry, and interviews. I'm honored to be included in the illustrious bunch.

Here's a sneak preview of the cover, designed by the talented Niall McCormack.
Posted by Therese Cox at 12:00 AM No comments:

Because nothing quite warms the heart like a cute skull stencil -- not to mention a cute skull stencil spray-painted on a Hungarian bridge. I've linked to this site once before, but I was delighted to learn that the skullifically adorable Skull-A-Day site is still in operation. So if this little guy captures your heart, you'll find more of the same there. Not to mention skull wallpaper, skull vintage vacuum tubes, and "Pancake Love Skulls." You're welcome.
Posted by Therese Cox at 12:00 AM No comments:

A glimpse of bright barn-red color and a bit of asymmetry to keep things interesting. The perfect antidote for an overcast March day.
Posted by Therese Cox at 12:00 AM No comments:

In cracking open the &7 archive again, I've become reacquainted with a few old favorites, a handful of forgettables, and some new additions to the number line I'll look forward to trotting out when their, er, number comes up. This modest #291 hasn't basked in the online limelight since &7's inaugural year, so I figured it was due for a call up.

It's a fact born out of necessity that my New York numbers tend to be gathered in great hulking expeditions. The first year I kept this blog, I'd often be wandering up and down Broadway in a last-minute panic when I realized how freakin' hard it is to find three-digit numbers in ending in the 70's, 80's, and 90's. This was collected on one of those panic expeditions, though the image seems relatively calm, as if it was waiting patiently to be discovered. Appropriately, this address happens to house a dentist's office, which -- speaking of the 70's, 80's, and 90's -- would be just the place to go if you want the full experiential 70's, 80's, and 90's onslaught. A little "lite rock" with your Novocain?
Posted by Therese Cox at 12:00 AM No comments:

Gowanus gets a bad rap. A canal as well as a neighborhood, it's sandwiched between its more glamorous neighbors, places with Slope and Hill and Gardens in the names. Jonathan Ames, creator of the excellent show, "Bored to Death" wrote an episode called "The Gowanus Canal Has Gonorrhea!" Just in case you needed any more negative PR.

I used to be much more afraid of the Gowanus Canal than I am now, afraid each time that I'd cross the Union Street Bridge that down there in the rangy muck I would spy a three-headed carp, fearing that just by breathing in its bilious fumes I'd begin to develop a sort of biohazardous condition that would make me glow in the dark. Now, I play ice hockey on a sewage plant up on the Hudson, and my tolerance for gross bodies of water has declined substantially. :gingerly tucks flippers away, resumes writing blog post:

But there is beauty in Gowanus just as there's beauty anywhere else. These small, medieval-looking numbers stamped onto an address plate are a perfect example of the sort of thing you find when you're willing to slow down and look a little more closely.
Posted by Therese Cox at 12:00 AM No comments:

So I'm aware that blogging is dead (as is the novel, as is the Irish language, as is most everything I've devoted my livelihood to as of late, f**k the pundits), and yet..

I have this compulsion. This need for completion. The unfinished number line was bothering me. The lack of an obsessive public project, the want of an outlet to share a small piece of what makes me happy every day, was bothering me. So let's just say I'm going to keep this countdown going now that I've kicked it back to life and see if I can't make it back down to #1 after all.

On a blog that loves typography, there are days when the number is the star of the show. Then there are those days when you have to step back and let the wooden fisherman have his moment in the limelight. Here's to the fine yellow-jacketed seafaring gent I found one day while wandering around the piers in Monterey, California. He looks so pleased with himself and his catch that I couldn't resist.
Posted by Therese Cox at 12:00 AM No comments:

If a blog goes to sleep for two years and then wakes up, does anybody notice?
Posted by Therese Cox at 12:00 AM 4 comments: