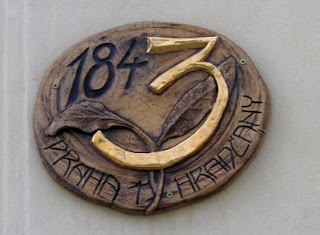 #3, Prazsky hrad, Hradcany, Prague
When I was about seven or eight years old, just copping on to this notion that there was such thing as cursive handwriting, I began asking myself if there was another way of drawing numbers. This line of inquiry led to many experiments in crayon and butcher paper as I tried to "invent" cursive numbers. Help came from who knows where, maybe my oldest brother who was studying engineering, but after abandoning the drawing board, I started making my numbers in the way engineers or architects did (so I believed). In any case, this picture comes very close to what makes, for me, the perfect number 3. The fact that it is not a "3" at all but an "1843" with a very exaggerated last number, makes it all the more charming.
Posted by Therese Cox at 12:00 AM

What a great project! I stumbled on your blog yesterday and decided to follow along. I understand the OC personality. I tend to be that way myself. So now when I see a number somewhere I will think of you. - I'm wondering why the 3 was accented and not the 1 or 8 or 4. By the way, why &7 and not *8?

There are loads of great 4-digit date stamps on buildings, but since I'm only insane enough to go up to 365, most will go untouched. The accented 3 was a nice gift so.

And Asterisk Eight isn't as much fun to say. Thanks for reading.

The explanation brings a smile.