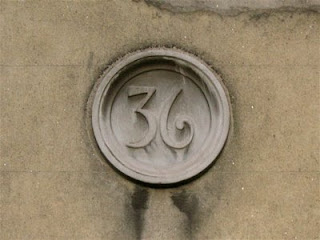 #36, Harrington Street, Dublin
Who says beautiful architectural ornament and boozing don't go hand in hand? It is Dublin, after all.
The 36, graceful and weathered, stands on a fading yellow building at the pleasant intersection of Harrington and Synge Street. Harrington Street was named after Timothy Harrington, a former Lord Mayor of Dublin and man-about-town, but it's the full text of Recollections of Jonah Harrington (zero relation to Timothy, alas) that led me in my wanderings to drinking songs of the country gentlemen of the 18th century. I apologize if my galling caprice and whimsical digressions puzzle my gentle readers, but I never pass up an opportunity to pass along a good drinking song, and it doesn't get much better than "Bumpers, Squire Jones". It may be useful to know that a bumper is a glass filled to the brim. A sampling:

Ye good fellows all,
Who love to be told where good claret's in store,
Attend to the call
Of one who's ne'er frightened,
But greatly delighted,
With six bottles more:
Learn Bacchus to follow
And quit your Apollo,
Forsake all the Muses, those senseless old crones;
Our jingling of glasses,
Your rhyming surpasses,
When crowned with good claret, and bumpers, Squire Jones.

Harrington was also kind enough to recall the robust ode to intoxication, "The Rakes of Mallow", though commentary in the Recollections claims this is "a jingle far inferior to the one just quoted". Readers, what think ye?

The Recollections of Jonah Harrington (part of the Every Irishman's Library series, a kind of Hibernian Great Books of yesteryear) seems poised to provide many an hour of reading pleasure, and I shall endeavor to share any diverting discoveries here on my fair blogge. And now, if you will kindly grant me pardon, I must heretofore retire, bumper of claret in hand, and devote myself to the task of imbibation.
Posted by Therese Cox at 12:00 AM

What's interesting to note is that all of your posts arrive at the stroke of Midnight. It makes obvious sense to me because all past numbers are only good for twenty-four hours and nothing more. You are definitely number one at iteration!
My drinking song days were during the last century and are long past. I had fellow Irish imbibing buddy then and our songs were rather crass and not as sophisticated as your samples. Either one would have improved our repertoire.

Yeah, I've been on a drinking song & sea shanty binge since attending a music festival in Sixmilebridge, Ireland a few weekends ago. There was a group called Kimber's Men that made me long for the life of the sea I never had. But I do have a life of the pub, so perhaps there's still hope for a revival.

It may be time to revisit "Put Me on a Handcart and Roll Me on Home," my own fledgling drinking song, composed, aptly, one late night at my local. Anyone else feeling the love? What may be the titles of the next generation of drinking songs/shanties?

A bumper is a tossed away cigarette during the depression of the 1930s, when roll-yer-owns were the rage. My father tells of trailing through bins, sitting in the adjacent gutter, and reconstructing one fag from the many bumpers. The exhale of the first puff was a pleasure to see him replicate.