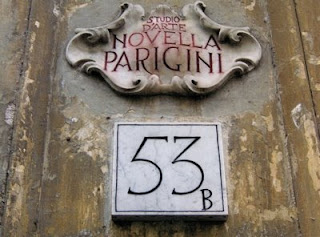 #53, Via Margutta, Rome
Maps are wonderful and useful things, but it is also a wonderful and useful thing to abandon a map and set out to explore a city without trying to find where you're going. You might begin at a well-known landmark, the Piazza di Spagna, and set off in the direction that looks the most intriguing. You know it when you see it: that forgotten alley where the Vespa is parked outside of a zebra-print painted doorway, that quiet, tree-lined street that is an oasis of quiet after the chaos of the Spanish Steps.
It was late afternoon when I stumbled upon the Via Margutta. The air was warm as it started to rain. I ducked into a doorway and opened my umbrella. The cobblestones beneath my feet grew black and slippery, making me slow my pace. The street was lined with mysteriously shuttered up art galleries and antique shops with hand-carved names. Leafy trees and ivy lined the walls that were the colors of gelato, darkening in patches in the rain. The weather had discouraged people; they waited scowling in doorways or hurried into chocolate shops. I kept on and discovered some beautifully engraved numbers and plaques along the walls, like this 53B.
When you don't know what you're looking for, you often don't know exactly what you've found until much later. The Studio d'arte Novella Parigini caught my eye for its unusual plaque. But it was in fact the home and studio of an actual Ms. Parigini, an artist who would often have in her company Dali, Sartre, and Cocteau. More research yielded more discoveries. In Roman Holiday, the Via Margutta was where Gregory Peck's character, the expatriate American reporter Joe Bradley, resided and where, in a memorable scene, Princess Anne (the always stunning Audrey Hepburn) remarks outside: "I've never been alone with a man before, even with my dress on. With my dress off, it's most unusual." The address? Number 51, just next door.
Posted by Therese Cox at 12:00 AM

...(but, as a character in Raymond Queneau's The Flight of Icarus very rightly asks himself, 'Is 13A an even or an odd number?')...

Damn it, you beat me to the Georges Perec!

Oops! I hope I didn't spoil any future posts!

No, it's only fair since I think I beat you to the punch with the GP quote on Archiseek many, many moons ago. Ha!

It's a great quote and I smacked my forehead when you posted it, since of course, I'd considered it for both this one and the 20A. But thank you for bringing it up. I think I'll have to resurrect it in a future post since I still have no answer.

My head whirls with unknowledge. Instead, will watch RH just for that line.