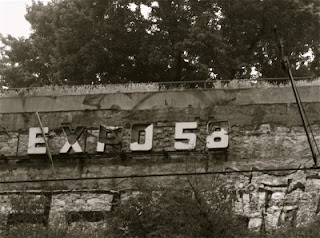 #58, Holesevice, Prague
Atop a lonely bluff in Prague overlooking the Vlatava River, the remnants stand of a sign that reads RESTAURANT PRAHA EXPO 58. It's like the Hollywood sign, only more ramshackle, but unlike Hollywood, where "youth" springs eternal, this sign is a nod to the past. OK, quick: World's Fair. What springs to mind? Maybe a few memories or associations are knocking about up there like marbles. You've heard about all the things that were invented or introduced for the first time at one fair or another: the ice cream cone at the 1904 St. Louis Fair, the Ferris Wheel in 1893 in Chicago. Maybe you think of that serial killer from Devil in the White City. But invariably, you think of the past.
In 1958, Brussels hosted the Expo 58. It was the first of its kind since the 1939 World's Fair in New York. World War II had, er, interrupted proceedings, and there was a great feeling of optimism about the Expo 58. Czechoslovakia, still reeling from Stalinism, was under strict state control, but the arts flourished. One exhibition that got a lot of attention was the Lanterna Majika, or the Magic Lantern, a performance piece with live dancers and actors interacting with film projections -- a highly novel notion at the time. Also, Expo 58 was home to the award-winning Restaurant Praha built specially for the occasion, a curved steel construction with an aluminum glass facade.

Czechoslovokian participation on the world exhibition in Brussels was significant in a sense that it meant the return of the country into civilised Europe . . . The steel construction bore no comparison to the previous totalitarian era. The basic idea behind the architectural design was contrasts of glassed-in, airy parts with mighty pavilion cubes.

Mighty pavilion cubes. I love the quirky linguistics of translated websites.
The Restaurant Praha Expo 58 was later dismantled and re-built in Prague at the edges of the Letenske Orchards in Holesovice: hence the hilltop advertisement you see in the photograph. The building still stands but it's no longer a restaurant. After suffering a chaotic phase of changing ownership, looting, and vandalism, it was eventually restored in 2001 and converted into -- what else? -- an office building.
Many Belgians ate soft-serve ice cream and drank Coca-Cola for the first time at Expo 58. The Russians were ahead in the space race and Sputnik was a big hit. Orson Welles was there. There was a real "World of Tomorrow" optimism to the theme and design. I especially love the Expo 58 logo. 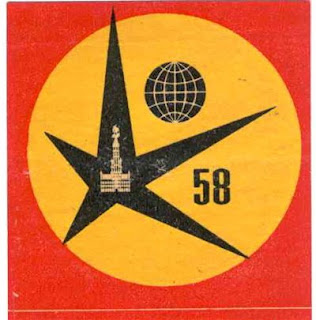 We're so globalized now that a World's Fair seems, sadly, beside the point. Stupid things are being invented every day, all over the world; innovations spring up and we use them without thinking; our international artistic exchanges now take on the ghastly shapes of Baywatch and the Eurovision Song Contest. But those feeling retro might want to take the ViewMaster tour and imagine what it must have been like at Expo 58. Futu-rama!
Posted by Therese Cox at 12:00 AM

I want to start a band called Mighty Pavilion Cubes. It's got a ring to it.

I think Bjork tried that once.

Whilst I like all the extraneousness (Z?) that illustrate each number with, my poor brain was confused by this text.