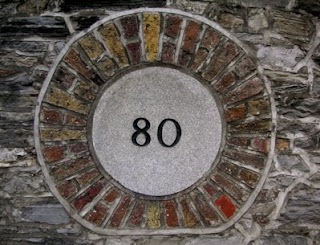 #80, Dartmouth Road, Dublin
Dartmouth Square is a beautifully situated, quiet park in an area of Dublin that is most often referred to as leafy. (Leafy = nice 'hood) When I lived in Ranelagh, I'd pass it frequently and feel, briefly, like I was transported. The iron railings, the Georgian houses, the cozy mingled smells of smoke and leaves filling the air: it wasn't far from the city center but felt miles away. (For those who wish to be e-transported, some lovely pictures are here .)
So you might imagine my shock and chagrin when I learned, a few years ago, that Dartmouth Square was in the midst of a swirling controversy. Noel O'Gara, a well-known egocentric opportunist eccentric businessman had bought the allegedly privately owned park for a steal and was planning on doing with his land some very strange things indeed. Turning it into a car park, for one. Opening a creche and a gym on the site, for another. Over the course of several months as planning controversy raged , O'Gara's crackpot plans and things in Dartmouth Square grew subsequently weirder. The park grew unwieldy and overgrown. Its gates were padlocked. There were rumblings of building two-story apartments on it. And for a few days, NoG went in with a van and operated a "portable showroom" for his granite tile company, much to the anger of nearby residents. Things appeared to die down. Then last year a tent appeared mysteriously one day in the beleaguered park. Mr. O'Gara said he authorized the mini-campsite that had sprung up and claimed his gardener was living in one of the tents. Just before Christmas, the tents were set on fire and their ruins left to fester inside the park.
When I went back in January of this year, the square was in a state of disgrace. Trash inside the padlocked gates was strewn everywhere: beer cans, food wrappers. I even saw a broken TV amidst the wreckage. The latest madman plan is to parcel up the land into little vegetable gardens. I do use these letters sparingly, but one can't help but look at the mess that has befallen the square thanks to NoG and think, WtF?
Posted by Therese Cox at 12:00 AM

Someone let his tyre down.