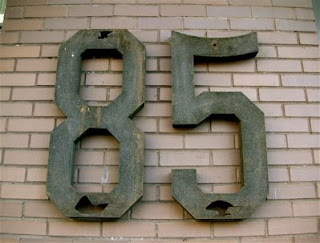 #85, Smith Street, Brooklyn
You gotta hand it to the Nu Hotel, pictured above, for having the chutzpah to open a "nu" hotel directly across the street from Brooklyn's notorious House of D. You can see that they hope to circumvent any distress out-of-towners may feel at staying within gunshot of the 11-story, pink-tinted behemoth juvie detention center by "distressing" the oversized numbers stuck to the dull brick wall.
And this 85 is as good a time as any to link to designer Michael Bierut's post over at Design Observer called 26 Years, 85 Notebooks. Since I saw Bierut speak eloquently about fonts, serifs, and doomsday advertising at Postopolis! two years ago and after my recent rapturously geeky experience seeing the film Helvetica, which I wrote about here , I've had his work and his insights on my radar. So imagine my awe at the vision of Bierut's 85 composition books, all filled in with notes and sketches and ideas, stacked on a chair like a totem pole or a twisting skyscraper or an astonishing stack of pancakes. In the accompanying essay, Bierut provides a tour through some of the notebooks and what they have meant to him over the years:

On August 12, 1982, I took a 10 x 7 1/8 inch National Blank Book Company composition book from the supply closet of my then employer, Vignelli Associates. From that moment, I have never been without one. I always have one at my desk. I take one with me to every meeting. I am now in the middle of Notebook #85. It's in front of me right now. Together, these well-worn books create a history of my working life that spans three decades.

He describes design process, discovery, and his dislike of gridded paper. There are tales of lost notebooks (#45, lost in Heathrow and another lost in, oddly, the United Airlines headquarters in my hometown in Illinois) and puzzling later over notes that remain cryptic even to the notebook's keeper. ("Did I ever call Dilland? Whatever happened to Executive Sign? What was the Lefand Alliance?") Even better, you can sneak a peek inside some of the notebooks and see what really goes on in a designer's brain. Mmm.
Posted by Therese Cox at 12:00 AM

mmmmmmm. old notebooks.
Such a delightful experience going back and looking at strange scraps of thought scrawled about something that at one time was identified as Poignant or Important or Crucial, even.

I love looking at old notations on sheet music too. Once I found a note I'd written- "Breathe on men" written above a particular line of music in 'Pirates of Penzance'- which struck me as hilarious. Breathe on men!? Ah-- take a breath on the word 'men.' Puncutation is indeed, important.

Great post, T. Loved it so much I wrote about it on Artisan's site. Read here! http://www.artisantalent.com/blog/post/Michael-Bierut--No-Fancy-Moleskins.aspx

Seriously, those notebooks are so tasty-looking I could just bite into them. I'm glad to know others share my fascination.

"Breathe on men": hilarious! That would make a great exploration, Jackie: out-of-context marginalia in sheet music and play scripts. I'm sure I could dig up a couple from when I was in an adaptation of Michael Lesy's "Wisconsin Death Trip" in college. Our director had a way with words and I would often have notes in the margins of my script that said "EXPLODE LIKE SPIRITUAL NAPALM!"

what do you call that 85 font?

It looks like a weird grimed up version of Princetown LET to me. With a bit of Hardsoul thrown in for good measure. But the swoop on top of that 5 is quite unusual against the geometric angles of the rest of the type. If anyone has a closer match, let us know...

The wonderful "flip top" journal- I'm sure it has a serious name- the "cop ticket and crime note pad" holder, or "The Dr. Watson 1895 style".

And they work great for the lefty in everyone. I'm only on "flip top" #3, but the pouch in the back has pages from other notebooks (that wonderful, bottomless pouch)

#1 has old parking tickets and notices.

#2 is mostly blues lyrics and my strange musical "arrangements" to go along with them. You have to be careful with the lyrics, I'd like to meet the person who changed the song "Stack-O-Lee" to "Stagger Lee". Then again, i am writing this on a "notebook" computer.

In #3 you can get a crash course of the rise of the Dutch Republic, vacation plans, and slanted writings written in the dark.

Brian - notebook pockets rule! It's not a Moleskine, perchance? And good to know the handy flip top style is lefty-friendly. Better than those "left-handed notebooks" where all they did was put the spiral on the other side.

Yeah, I've wondered about Stack-O-Lee too. I'm sure there's a 9-part documentary out there that explains it all.

The jagged holes in each letter indicate to me that this number was de-stressed upon.