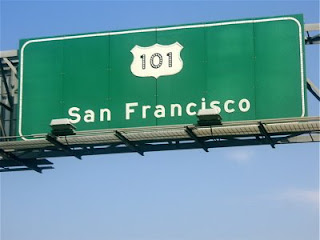 #101, en route, California
Few things are more iconic than the road signs of American highways. One look at that emerald green and white sign and I'm ready to stock up on crappy gas station food, grab a cherry Icee, and hit the road, windows down, doing cool aerodynamic things with the plane of my hand. Someone told me not long ago that the pull created by driving with the windows down actually uses up more energy than driving with the windows up and air conditioning on full blast. Maybe you've been told this "fact" too. People who tell you things like this are killjoys that should never be listened to under any circumstance. Anyone with a big fat super-sized freedom-loving American soul knows that the only way to enjoy the open road is to breathe it in at 65 m.p.h., windows down, with the Minutemen's Double Nickels on the Dime cranked up on the stereo. If you can do this on a coast or region far from home, so much the better.
Road trips are very near and dear to my heart. I dwell now in a big city. I shop at the local supermarket and support public transportation. I ride my bike and walk and take the bus and enjoy not having to navigate New York City traffic or deal with alternate side of the street parking, and I feel warm and fuzzy when I see those SubTalk signs telling me I'm doing good things for the city and the environment, even as that guy with the guitar and the mini Marshall strapped to his belt on the hurtling A train is playing "Baby Can I Hold You" for the thousandth time. But deep in my subway-taking, cheerfully cycling, pedestrian's soul beats the wild heart of a broad who just wants to get behind the wheel.
It was on road trips out west, sitting in the back of a huge blue Econoline van with my brothers in the back and parents in the front, that I learned the collector's thrill of the license plate game. I hunted the plates of passing cars and parking lots, hoping to collect all 50 states. One year we even got Alaska and Hawaii, our quest stuck at 49 until West Virginia sped past. I doubt if &7 should exist if I hadn't had such early training in delightfully pointless hunting and gathering.
It comes as no surprise that the American landscape is changing. Strip malls and exurbs have replaced prairies; cities like New York are constantly built up while others, like Detroit, are just as rapidly abandoned. Roads and highways form the arteries of this complicated network. Under constant duress, pounded with jackhammers and slathered with fresh coats of asphalt, they are no less susceptible to change. There's so much else going on and so many Ikeas popping up like Whack-a-Moles you long to pound back into the soil that as you pass through this vast landscape, you may not even notice one of the biggest changes going on right before your eyes.

Look closely at these road signs. Notice anything different between the two? It's subtle, but you can see the faint change. Check out the lettering. The first, like the San Francisco 101, is an example of Highway Gothic, the favored font for U.S. roads for more than half a century. The second shows Clearview, a typeface designed by Don Meeker and James Montalbano. It was designed, as the name suggests, for higher clarity and is the font of the future for American highways. You can read the full New York Times article on it and I can promise you it will change the way you see road signs. (Photo credit: Don Meeker)
Don't notice Clearview anywhere? Still feeling Highway Goth and can't figure out why? Check the list to see if your state's still rockin' it old skool.
I fear my enthusiasm may have driven my band mates crazy when we hit the road for our summer tour last year. "There's Clearview! There's another one!" I shouted from the back of the van as we coasted through Kentucky and Alabama. It's a small change, yes, but an important one. And a hell of a lot of fun to look for while you're eating that packet of Chex mix, listening to D. Boon.
Posted by Therese Cox at 12:00 AM

For me, Highway Gothic is easier to read. To my traveling eye, the words are more self-contained. Each word stands alone; faster to parse-- individually. Clearview words all blend together like one big word block, instead of individual words.

That is my intuitive, gut reaction. Now, I'll go back and read the articles to see what the "experts" say.

Ya know, I've never really been one for the road trip. Though when I was little I liked to pretend I was Laura Ingalls in a covered wagon when my parents drove us up to Vermont each summer. When you think about it, Laura Ingall's life was like one big road trip.

What I noticed about the picture, actually, had nothing to do with the font (my apologies)-- but rather the names on them. The name HELLertown coupled so close to Bethlehem? I think the "town namer dude" must have had a bit of a chuckle over that one.

Believe it or not, Ms. US 19, there are some pretty heated arguments over the Highway Gothic v. Clearview. I nearly had to break up a couple of fist fights over on one of those discussion forums. Misdirected road rage? I'd be curious to see if your P.O.V. changes over time.

Jackie, why can I totally picture you in your covered wagon? And ha -- good point about the HELLertown. We saw some pretty great town combinations on the Balthrop tour. I'll have to dig some up.

Sorry, just wanted to say that.

Clearview SUCKS. It's un-American, very similar to highway fonts used in Europe. I hate it.

I completely agree with Bob. Clearview is atrocious and is unpatriotic. Highway Gothic is an amazing font and should be left as the standard that it has been for over 50 years. I have absolutely no problem reading it. This Clearview nonsense is just another way to pander to those who like everything to be pretty. Let me tell you something: Clearview does not come off as a serious, authority-possessing font. It's just too pretty looking to be taken seriously.

Moles and Ikea had me chuckling along in his one ...