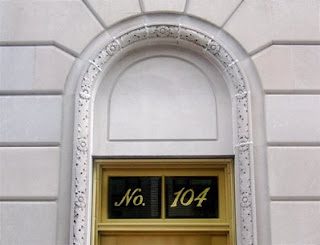 #104, Upper East Side, NYC
It's not often you'll find me on the Upper East Side anymore, and when I do go, it's usually on my way to the Whitney to cash in on my free CUNY ID museum pass. But when I do find myself walking along those genteel streets between Lexington and Park, Park and Madison, I look up in wonderment at these mausoleums of apartments and wonder who lives inside them. Every so often I'll spot a waving flag from the parapet that lets me know I've stumbled upon an embassy. And these aren't doorman buildings, so the pedestrian is denied even the humanizing sight of a man in a forest green suit with piping down the legs and gloves and funny hat. No bikes chained to the railings, no delivery boys bringing Have a Nice Day bags of food to the fourth floor walk-up, no doors slammed and no sweatsuits running out to the gym. People don't live in these buildings; they're disinterred from them.
I had the pleasure this evening of attending an event on the (keepin' it real) Lower East Side that my friend Stephanie curated at the Angel Orensanz Foundation called Library of Dust, based on a series of photographs by David Maisel. The photographs are eerie still lifes of chemically corroded copper canisters containing the unclaimed ashes of psychiatric patients from a state facility in Oregon -- the asylum of "One Flew Over the Cuckoo's Nest" fame. It was one of those quintessentially New York evenings that makes you feel like you've been lowered into a vat of boiling, bubbling culture and you're either going to get a great dish out of it or die trying. Geoff Manaugh from the yummy architectural site BLDG BLOG was on hand to offer insight into Maisel's photographs. You can read Geoff's excellent essay on the project and see some photographs here; I can't recommend it highly enough. Geoff was a great speaker and provided my first barometer that I was in serious culture vulture territory. You know when someone prefaces a reference to Rothko admitting, sheepishly, that this is "a little cheesy," that you are in some dangerous waters, my friend.
Still and all, the event was both intellectual and lurid, two of my very favorite things, and it got me thinking about art and memory and class and insanity and human remains, and while it cultivated in me a serious need for some fresh air and a Leffe blonde, it was a worthy meditation. As far as compare and contrast goes, the evening had it in spades. It was discomfiting to sit in a roomful of educated New Yorkers and stare at a screen with images sleekly projected from a clear podium (upon which a MacBook was placed like an objet d'art) and hear ten-dollar words bandied about while looking at images of pepper canisters of dead psychiatric patients' ashes. Some of the cans had peeling labels and all had numbers. Numbers were carved into the lids of the cans and written alongside the carved number again with a red grease pencil. There was the guilty twinge: should I be getting excited about this?
In any case, Maisel's gorgeously corroded photographs and the sublime decay of the Orensanz Foundation building itself, a hauntingly lit old synagogue styled after (what else?) Chartres cathedral, offered an antidote to the clean architectural order of today's 104. And if you saw what happened when a clean-up crew decided to place the decaying canisters of ash inside identical black boxes, as they did in 2005, imprisoning the unique chemical blooms inside what appear to be Ikea shelving units, you might have sighed as well. Symmetry can rob us of our humanity. And not everything ugly is meant to be so neatly contained.
Posted by Therese Cox at 12:00 AM

Your post reminded me of a visit I once paid to Dammasch Psychiatric State Hospital in Oregon many years back. I was a technician for a dental equipment dealer and had a service call there. It's all just a fuzzy spot in my memory except for one vivid scene. I'm walking down a typicaly wide hospital hallway painted with institutional green and lined with locked doors. The floor is a dark highly waxed linoleum reflecting the florescent lights and approaching me down the hall is a woman perhaps in her thirties. As the space between us closes, she begins rubbing her breasts and continues as we pass. My uneasyness then doubled and I was greatful when I left. Now though, when I think of it, perhaps that was her way of hitting on me. I'm glad I didn't respond.
Dammasch was opened in 1961 but is now closed along with many other state psychiatric hospitals. There was a national de-institutionalization movement in the 60's and 70's. I can understand why if the ambience in all of the hospitals was as I described. Community care centers were then relied on for treatment. Unfortunately, I don't believe that system has worked effectively because many of the people who should be on meds to function, don't take them or can't because their expensive. Too many end up on the streets medicating themselves with alcohol.
Oops, I'm ranting. Better stop.

The canisters are georgeous. There's a bible verse that speaks of beauty for ashes. It's in Isaiah 61 if you're curious.

Yeah, the old state facilities were really a mess. Even though we've done away with some of the "One Flew Over the Cuckoo's Nest" type institutions, the system is still dismal. We just have better installed hydrotherapy control panels, really.

Some beautiful poems along the same lines - beauty of ash and so on - were read last night, including one by Derek Mahon I love called "A Disused Shed in County Wexford." Heroic mushrooms: check it out.

"They are begging us, you see, in their wordless way,
To do something, to speak on their behalf
Or at least not to close the door again."

I think I've been on both sides of that door.

As long as it's not both sides of the canister, you should be all right.

Have determined that I need a notebook.

Forgotten the name of the other poet a dozen or so numbers back. Frank someone ... O'Hara ... love search engines that have a memory.