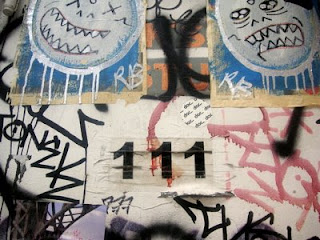 #111, Soho, NYC
Without quite realizing it, I embarked on a sort of impromptu Rorshach test last week right here on &7. I posted a 106 that had an intriguing, mysterious air about it. A few of my faithful readers offered their remarkably inventive interpretations of what was obviously just a trio of inverted acorns gathered for a nefarious neo-druidic ritual. (Duh.) Sure, one could conceivably take the lazy Freudian's approach and argue that sometimes a cigar is just a cigar and a number is just a number. But what fun is that?
This issue has reared its pointless head, of course, because this 111 is a fairly accurate representation of what it looks like in my brain. Forget the MRIs and CAT scans. Rogue New York street artists have their fingers both on the can of spray paint and on my pulse. Although I did participate in a handful of plays in high school (showing my full range as an actor by playing, at various points, a murderous old lady, a libidic southern girl, and a possessed young nun who suffered the stigmata), I remember shunning the choice of the comedy & tragedy masks on my high school class ring because frankly, I found them neither comedic nor tragic. But these hysterical, hyperbolic, Sharpie-drawn faces really have nailed my fluctuating emotional states in a way those masks never could. Well done, nameless street artist. If only you'd worked for Jostens in the early nineties, I might've been able to put food on your table. A can of Pringles, at the very least.
So for my readers: if you happen to find yourself in that Rorscachy, personality inventory kind of mood as I so often reluctantly find myself, studiously taking online quizzes that pose philosophical queries like "Who's Your Inner Rock Star?" and "What Type of Goth Are You?" and if you'd like to while away some time in the Ye Olde &7 Archives, here's a question for you: which of the numbers pictured so far best represents what's inside your head? You can dig through the archives or just give me your most recent, knee jerk of a response. Inquiring minds want to know.
Posted by Therese Cox at 12:00 AM

I think this lopsided bad boy...

..describes, not so much what's in my head, but my physical appearance. Some are born with one leg an inch shorter than the other. Boo hoo.

Try fifteen inches. For the first ten years of my life I only walked in circles. I spent my waking hours in a perpetual state of dizziness. I only left my front garden for the first time at the age of 21, when 'old shorty' enjoyed a late growth.

I'm still not even -- for example, I'll never be able to balance a pint glass on my head -- but I'm only listing these days at Leaning Tower of Pisa rates.

Very glad you clarified, begrudger. For a moment you had me thinking that you had the skyline of Manhattan tattooed on yer face.

Fun idea! And such nostalgia, going through those old numbered photographs of yesteryear. (Or... earlier this year.)


I choose #47-- for the dark colors that swirl around the very clearly printed number. I'll leave the explanation at that so that &7 readers are free to invent strange Freudian inferences of their own.

WV:
chicerse- a small group of first grade girls who present the capacity to be popular (though mean) when they enter junior high school.

I cranked up the "Random Number Generator" for that very purpose. Ah, strolls down memory lane.

What do you think of the word "yesterweek," Jackie? I think it has potential to make the OED if we rally hard enough.

Hmm, funny how inviting a Freudian interpretation just makes me want to get all logical. It must be the contrarian in me. All I got from my analysis is "This girl really wants to go to Verona."

So, which one is yours? That's what this inquiring mind wants to know.

Apart from the 111? No, I think this pretty much nails my psyche. (Ow.) Though in my folly I aspire to be more like that 3 from Prague: well-ordered, crafty, aesthetically pleasing, and, um, just plain cool.

And Ray, that 87 does remind me of you. It wouldn't have anything to do with the snow, now would it?

Nothing to do with the snow, actually. It's the quriky carnivalesque quality of the bulbs more than anything. Although your exchange with Jackie about Gatsby nails it too.

WVW: dauling - a young girl toward whom a woman feels maternal but who is not actually the woman's own child