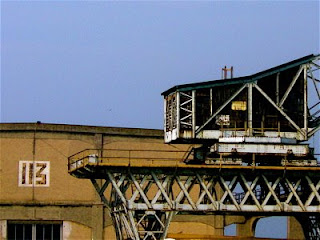 #113, Venice, Italy
In Italo Calvino's Invisible Cities, the young Venetian traveler Marco Polo tells the old Kublai Khan stories of fantastic, impossible cities, cities made of "exceptions, exclusions, incongruities, contradictions." One has a thousand wells with gods living in the buckets. Unmatched shoes tumble down in avalanches in another. Bored citizens of one city leave at the same time and start an entirely new life in a new city. Drainpipes and cobblestones merge, girls holding skulls milk the carcasses of dead heifers, memories are exchanged with a glance. The cities have names like Euphemia, Valdrada, Eudoxia, and Fedora. When Khan demands that Polo tell him stories about Venice instead, Polo admits that "Every time I describe a city I am saying something about Venice." Clever bastard, that Marco Polo.

"Memory's images, once they are fixed in words, are erased," Polo said. "Perhaps I am afraid of losing Venice all at once, if I speak of it. Or perhaps, speaking of other cities, I have already lost it, little by little."

For me, what isn't fixed on film is fixed in writing, in notebooks: the eighty-cent prosecco, the dead ends at canal edges, pigeons in the piazza, the sputtering engines of the water taxis, gondoliers' oars rolling gently to the sounds of an accordion, the porticoes passing by with delicious slowness. There are a thousand Venices packed inside of one Venice, and the one I took a shine to was this one: the steel and crane, the rust belt-meets-maritime outskirts, the faded 113 on a slab of concrete. Go figure.
Posted by Therese Cox at 12:00 AM

Hi, it's a very great blog.
I could tell how much efforts you've taken on it.
Keep doing!

Therese, visiting your blog is always an edifying experience, even though I'm not educated on the theme.

I come here for my dose of culture, and it eases my anxiety about subsequently watching 9 episodes of The Simpsons in a row.

Thanks, Olive Tree, glad you enjoy it. And for what it's worth, I could totally go for a guitar ensemble right about now.

Flann, glad to have you frequenting my little corner of the universe. Just as long as you realize that some days I merely edify what an obsessive freak I am. Though with nine episodes of anything in a row, you wouldn't know a thing about that now would ya?

I would not have picked this as Italy that alone Venice. Nice though.