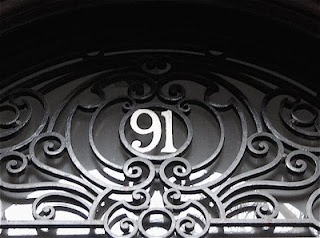 #91, Remsen Street, Brooklyn
On the brick wall of 91 Remsen in Brooklyn Heights, just to the right of the brownstone's steep steps, a small red plaque stands. As I walked past recently and saw the plaque for the first time, I had my usual brief moment of syntactic confusion (I have tendencies to mix up Millers Arthur, Frank, and Henry). Then it clicked. Not Death of a Salesman (Arthur) and not the Sin City graphic novelist (Frank). Ah, that one: Henry! The one who wrote all that smut that was banned! Pleased, I looked longer at the plaque. The writer, born and bred in Brooklyn, lived at 91 Remsen for only a year, from 1924 to 1925. I still haven't read much of Henry Miller, just bits and pieces -- he's one on my list to delve into -- but I do remember that the recollections of Brooklyn I'd read of his were pretty disparaging ones. Take this paragraph:

It was in 1927, in the sunken basement of a dingy house in Brooklyn, that I first heard Rimbaud's name mentioned. I was then 36 years old and in the depths of my own protracted Season in Hell . . . I was then at the very lowest point of my whole career, my morale was completely shattered. I remember sitting in the cold dank basement trying to write by the light of a flickering candle with a pencil. I was trying to write a play depicting my own tragedy. I never succeeded in getting beyond the first act.

This is the bleak opening to The Time of the Assassins, Miller's study of Rimbaud. It's billed as such, though as Karl Shapiro notes in his introduction to Tropic of Cancer, the discursive and subjective Assasins is "one of the best books on Rimbaud ever written, although it mostly about Henry Miller." It's a decidedly weird book, bordering on the fawning and the fan-fiction, but I think it's the obsessive Rimbaud -- He's Just Like Us! mindset (such as one sees in celeb mags that fixate, with fascination, on the fact that stars -- not just us boring, ordinary chumps -- also pump gas, drink iced coffee, and reach to the top shelf for toilet paper -- OMG!) that makes it interesting. Another excerpt from the same book:

Like Rimbaud, I hated the place I was born in. I will hate it till my dying day. My impulse was to break loose from the home, from the city I detest.

With these less-than-flattering portraits of the borough in mind, I was curious about Miller's year at 91 Remsen Street. I was going by memory. Could this idyllic brownstone be the same basement flat where he spent his Season in Hell? Was this where he spent his miserable childhood? As it turned out, nothing could have been farther from the truth. At the time, mercurial Miller was on the upswing, building what he himself called his "Japanese love nest" with his new wife right here in Brooklyn Heights. He describes the space in his novel Plexus (many of Miller's novels draw heavily on autobiography):

The floors were of inlaid wood, the wall panels of rich walnut; there were rose silk tapestries and bookcases roomy enough to be converted into sleeping bunks. We occupied the front half of the first floor, looking out onto the most sedate, aristocratic section of Brooklyn . . . Most of the day, owing to the stained glass windows, it was rather somber in there, or should I say -- subdued. But when the late afternoon sun struck the windows, throwing fiery patterns on the highly polished floor, I enjoyed going in there and pacing back and forth in a meditative mood.

Vive la difference! You can see it just in his movements. In the first Henry is haggard, hunched over a desk in a "cold dank basement". In the second, the light is let into the room, he paces freely, he can gaze through windows out at the world instead of bleakly looking inward. Same old Brooklyn Heights, but vastly different places both physically and psychologically. The room lets in light, and so does he.
In June, 1924, Henry Miller married June Smith Mansfield. Shortly after the wedding, they made 91 Remsen their home and spent a happy year there living completely beyond their means. They survived on June's charm and Henry's not-very-lucrative attempts at self-publishing. In September of 1924, Henry walked out of his job at Western Union to make a living as a writer. He began furiously composing, creating a series of weekly mini-manuscripts known as the mezzotints. There is a beautiful description of the project here, down to the colored card stock and June's eyelash-batting attempts to sell them off. Basically, Henry's guidelines for himself were this: he would force himself to produce a 250-word piece every week: sometimes old material, sometimes new. He'd work on the piece, print it up (the mezzotint process is an old printmaking process, similar to intaglio) and try to hand sell copies to everyone from strangers in Greenwich Village to random people listed in the telephone book.
Henry and June and friend Joe O'Reagan all worked together on making these 'zines happen. There seems to be an atmosphere of excitement surrounding the enterprise, despite the financial woes and trouble getting other people interested. (You can just imagine the fever-eyed fellow on the subway running up to you and how feverishly you bury your nose into your book as this gargoyle approaches: Here! Read this thing I wrote! I printed it myself!) But his descriptions make it clear. It wasn't about selling. It was about the creating, the flurry of enthusiasm, the joy of self-imposed projects and deadlines. Miller describes the mezzotints in Plexus, calling them a "jigsaw puzzle" of a project. He would write some two or three thousand words and then hack and whittle away the prose poems and pieces down to the magic number, 250. 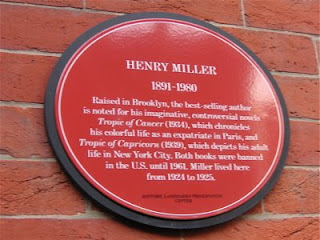 Henry and June lived happily at 91 Remsen Street until their eventual (inevitable) eviction a year later. But the slice of the high life must've been good while it lasted. But you have to wonder: What, oh what, would Rimbaud have said? 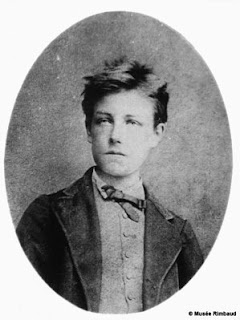 Rimbaud: This French poet hated his childhood home, too!
Posted by Therese Cox at 12:00 AM