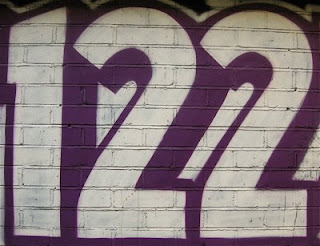 #122, Francis Street, Dublin
Parking a car in traffic-strangled Dublin is an experience most likely to provoke grumbles at best; at worst, it can be positively harrowing. Despite up-to-the-minute flashing signs constantly updating how many unaffordable cars are jamming up the ILAC shopping center, knowing where to park your precious four wheels can be a hassle. I couldn't care less about city driving these days, but I'm not so calloused as to be immune to the charms of the well-painted car park.
Walking away from the city centre, past Christ Church and up the slope of High Street, the streetscape begins to change. The semi-toxic smell from the Guinness Brewery gets stronger and the ratio of derelict shops kicks up a notch. And then, if you turn into Francis Street, you'll happen upon an eye-catcher of a mural: the 122, part of a phone number spray-painted to the wall. I happened upon this red and black wall next, just inside the car park: 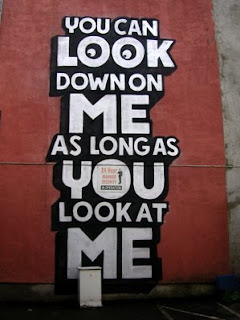 A few steps past the security gate, I realized I was not in a car park per se but a street art incubator. Businessmen parked their Alfa Romeos and strolled out of their cars without giving so much as a second look to what was on the walls. Probably it was just a bit of forgettable backdrop. But what I saw was jaw-dropping in its color and scope. And, like discarded cans of Bulmers jamming up the gutters, it was everywhere. 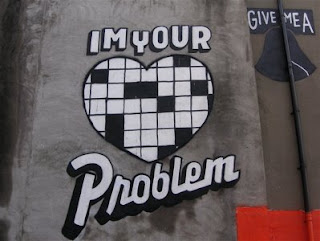 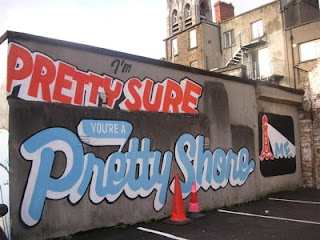 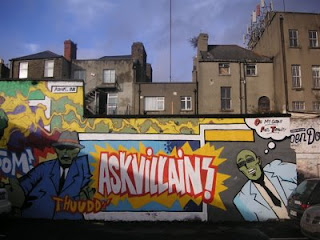 Many more cool car park murals abounded, astonishing and amusing the eye. But how they managed to get this last portrait of the artist as a young woman so bang-on accurate is anyone's guess. I'm flattered by the portrayal. Missing the nose ring, but otherwise, spot on. 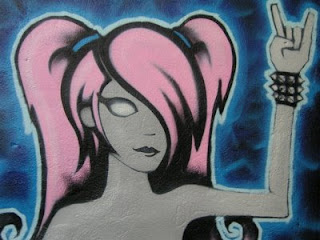 Judging by that dwarfed bedside table, these graffiti are behemoth!