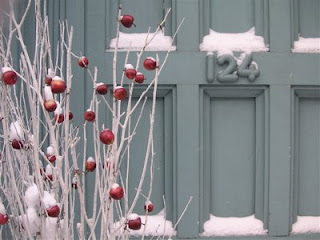 #124, Boerum Hill, Brooklyn
Nothing transforms a city faster - and with such stunning special effects - than a fresh coat of snow. The quiet that descends on the city is surreal. Suddenly, instead of revving engines and overly amped-up reggaeton from rolled-down windows, there is soft swish of car wheels laying down tentative tracks. Commuters tread softly. Kids roll around in snowsuits in parks, shielded from the dirt that lurks beneath. Rooftops and fire escapes sparkle. The colors of buildings - even the dullest of brownstones - suddenly reveal themselves in all their technicolor awesomeness. All too often the architecture gets lost in all the tchotchkes we impose on it and all the visual litter that clutters up the streets. Snow is the great leveler. It's the Wite-out that glosses over the mistakes.
My very first memories of New York are snow-capped ones. Tribeca, pre-Christmas, with the flakes falling serenely on the vibrant night: this, to me, will always be my private New York City. Every winter since then, I've looked forward to the every-so-often forecast of snow that makes me feel all is right with the world: that we're not already knee-deep in global warming dystopia and that normal seasons still exist.
Whether rain or snow, sleet or hail - I'm beginning to sound like the postal service - the weather can shift our perspective not just of a day but of an entire city. So my question to you is: wherever you live, what's the forecast that makes you want to run out and explore? Or what's the season that shows off your city/state/region's best side? And what makes you want to cower inside a temperature-controlled bubble? John Updike, who loved New York, chose not to live in New York City because it's such a precarious place that something as simple as rain could upset the whole balance of the day. Add enough of those days up, and it can break you down. While I'm not going to move to Massachusetts over it, I sure can understand what he's talking about.
In wake of the recent salt pile menace in Brooklyn, I had to give this 124 a double-take to make sure the substance that had gathered in drifts upon the door was not, in fact, errant salt. (Relax: this was February. And yes, that's snow.) The Brooklyn salt heap, for those who are keeping track, has since been safely ensconced in a fashion-forward black belted tarp that is sure to be all the rage on the runways this fall.
And fortunately, despite the back-breaking work that goes into shoveling it, no city official (to my knowledge) declared "snow pile menace" in New York this past winter - not that they should have. I will gladly have a smackdown with any shriveled, embittered soul who rants, rails, or embarks on passive-aggressive sighing campaigns against it. Snow in the city rocks: pure and simple. And I really have to stop all the drug double-entendres here. I'm trying very hard to provide you with several lines of untainted sentiment. And you just can't put a street value on that kind of thing.
Posted by Therese Cox at 12:00 AM

The rain in NYC is so disconcerting to me that it's become the basis of setting for my novel. Gets in my head. Strange, really...

The grammar police won't find you here. You're under the Witness Protection program.

beautiful colors, and love the LES shot too...so much information

actually it's 'it's' - you were right the first time