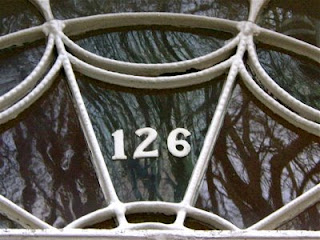 #126, Lower Baggot Street, Dublin
The world needs another picture of a Georgian Dublin door like it needs another pewter figurine of Yankee Stadium. Go to any souvenir shop or card rack in Dublin and you'll face an onslaught of "Doors of Dublin" postcards and posters. The doors are lovely, of course: all painted different colors - yellow, red, blue, black - lined up three by four like a posh bingo card. Looking at them, you'd think that everywhere you went in the city, you'd be greeted with Georgian splendor and brass door knockers and picturesque fanlight windows perched over each door like wedding cake toppers. This would be true if you were driving in Merrion Square with a GPS that told you to make only right turns.
Now I love geeking out on architecture, but I get a little prickly when it comes to these doors, only because they are so done. They are everywhere. But a curious thing happens when you give it a closer look. The individual panes of glass in the fanlight show their warps and weaves, the details of the white armature stand out like an elegant necklace. The 1 shows its serif.
However, in the process of all this wanting to be original, I did get to thinking about what else I could make picture postcards of, if not "Doors of Dublin". (If you do want to groove on those doors, you can find another photo of this 126 alongside its picturesque neighbors here.) The contrarian in me began to brainstorm objects I'd love to photograph that no tourist or native would want to buy or no right-thinking person would ever collect, whether relics of forgotten street furniture or utility-oriented objects: "Sewer Caps of Dublin", "Rubbish Bins of Prague", "Bootscrapers of Brooklyn". Well, why not? It's in keeping with the national mood, anyway. I declare we usher in the era of recession postcards: economic downturn doors! Sewers down which your 401k has been flushed! Oh yes, we'll keep it street, all right. Really street.
And as for my fledgling bootscraper series, I'd confidently thought my notion was highly original until, flipping recently through my well-loved copy of Wrought Iron in Architecture, I noted that someone had already beaten me to it. Well, almost. There it was, gloating at me in atmospheric black and white, page 162, Fig. 263: "Philadelphia Foot-scrapers." Though the Philadelphia Footscrapers sounds to me better suited to a zany 1920's kazoo and washboard band.
In the meantime, what unloved objects would you put on your recession-era postcard? Do tell. Let's make 'em in our basements. And then let's swap.
Posted by Therese Cox at 12:00 AM

Cobweb swap - this Saterday at the local Bait n' Web. See you there. Tell Charlotte.

Love the serif on the 1