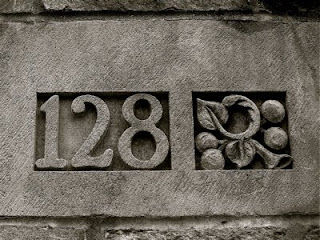 #128, New Haven, CT
I was in New Haven only four hours, but I was homesick for New York. Why? The pizza, mostly. Despite claims to the contrary, I was not converted to the sect of overachieving Connecticut pizza worshippers, though I'd gone in with high hopes. But the bookstores were flat out fantastic and the food wasn't a problem, as I was busy wandering the cold winter New Haven streets with a glazed look in my eye, looking for architectural treasures to capture. The usual.
In keeping with my homesick/city-superiority-complex theme of the day, I found that the botanical motif carved next to the 128 reminded me of the cherry mosaics that pepper the Delancey Street subway station where I sometimes catch the F train. Ephemeral New York has posted a brief history behind the tiny cherry mosaics, which, miraculously, were not just installed, as I had thought "because they were cute." I have watched the Delancey Street station go through many growing pains, including a scrap of unforgettable graffiti imposed on the half-ripped out tiles: how artfully DELA____ STREET was converted to BELA LUGOSI STREET. I still sometimes refer to it that way. "Now take the F to Bela Lugosi Street..."
Turns out the old DeLancey family, back in the day, did have a farm on what we now call the Lower East Side. And Orchard Street used to really have an orchard of cherry trees. As for old Bela? All I can say is he's dead, he's dead, he's dead.
Posted by Therese Cox at 12:00 AM

Bela Lugosi is dead Therese, but he isn't gone. He's up there, sitting on a cloud, sucking the blood of a bewildered St Peter (I presume fake vampires become real vampires in heaven?)