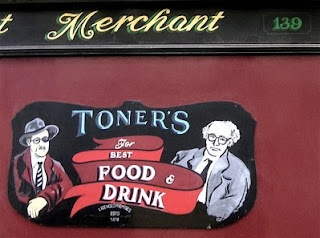 #139, Baggot Street, Dublin
My senior year of college, I dressed up like William Butler Yeats. Not every day, sadly, though I have to confess I cut a surprisingly sharp figure in a cape, flouncy poet's tie, and pince-nez. I made a pretty good six-foot-two Irishman for a five-foot-two American girl, and sometimes I think they must've switched souls at the Illinois hospital where I was born with a word-struck mystic outcast lad from Sligo. We've been trying to find each other ever since.
The method to the cross-cultural cross-dressing madness was a one-person show for my Non-fiction Studies class in the Performance Studies department. We were to research the life of a historical figure, put together a script using only primary sources (diaries, letters, first person accounts), and then perform a 30-40 minute long show where we became this historical figure. There were my classmates, parading about as Janis Joplin, Anais Nin, Frank Zappa, Bette Davis, and me, W.B. Yeats. The life of the party.
I mention this today, for 139's pub mural, because Yeats was not a drinking man. This asocial quirk did not make him popular among his fellow countrymen. As a child, children would jeer as he approached, lanky and gloomy, "O, here is King Death again!" As a grown-up, he was known as "Willie the Spooks." George Moore said of W.B. that he looked "like an umbrella left behind at a picnic." And as you can see, here he's been ousted from the hard man's drinking party with James Joyce and Patrick Kavanagh who are clearly living it up, bad eyesight and all, on the wall of Toner's. Only look at those drugged expressions. What do you suppose they're drinking, absinthe?
In any case, the famous prankster, writer, surgeon, and man-about-town Oliver St. John Gogarty (fictionalized as the character Buck Mulligan in Joyce's Ulysses) decided enough was enough with old stick-in-the-mud Willie and decided it was time Yeats fix his pub deficiency. (Yeats, apparently, had somehow made it to adulthood having never set foot in a pub, too busy writing unrequited love letters to Maud Gonne, the poor fella.) And so Gogarty convinced Yeats to have a couple of jars one night at Toner's on Baggot Street. Yeats sat quietly at a corner in Toner's, sipping his sherry. He finished his drink, stood up stiffly and announced, "I have seen a pub. Will you kindly take me home now," and left.
Still and all, I happen to love old W.B., and if I'd been alive when he was alive, I'd be dead now. But if he was alive today, I'd be sure to put up my dukes and defend poor King Death. Though I might find myself drinking alone, alas.
Posted by Therese Cox at 12:00 AM

This is one of my favorite posts. I didn't know that old W.B. was not a drinking man. And I absolutely ADORE that you dressed up like him. (Why NOT every day, T?)

Thanks, all. I wish my blog wasn't so addictive, Adam. I might get a lot more sleep.

Jackie, yup: old myopic, sober, W.B. Yeats. He got his kicks on the astral plane, rumor has it. As for the wardrobe, I suppose I should start small and see how the cape goes over first. The cape, incidentally, belonged to my great-aunt Eileen. She was a nurse during the war and had this amazing wool cape with red lining that was very Bram Stoker. But then Bram's a whole other post.

P.S. I have gifted you all with an ampersand today. You're welcome.

That's tremendous. Have only read one entry but I'm going to delve deeper tonight with some scotch and a candle.

My challenge wasn't one at all. An ampersand already!

Ampersands are always crowd pleasers. If only I'd known before setting out, I'd have re-named my blog to set lower expectations for myself. Ah well. You've all got me now.

And welcome, Radge! Just don't drop the votive into the Laphraoig and you should be fine. Glad to have you here.

I'd like to see this cape. (And the puppets you told me about.) Then we could play literary dress up and make up voices for each character....

Yeats's mistake? His choice of drink.

Make mine a hot port. And while you're at it, landlord, make one for the flouncy-haired *mystic* in the corner. That'll cure what ails him.

The Speakers - The Mountain Tomb - from 'Yeats Is Greats: The Speakers Sing The Poems of W.B. Yeats (and more).'
=> http://drop.io/vf6cyeu

In other news, as I've been internetting this evening I've had iTunes on random, during which time Stars of the Lid, Balthrop, Alabama, Guy Klucevsek (twice!), Yann Tiersen (twice!) and a bunch of other squeezebox stuff that makes me think &7 thoughts (Maria Kalaniemi, Evelyn Petrova, Chris Droney, you know the sort- or, um...) has tickled my ears.

And now the last tune before bed has turned out to be a stonking bagpipe number by Finlay MacDonald called... Died And Gone To Prague.

Robt - yeah, I don't know what was up with Yeats and the sherry. Sherry is never good idea. Though I used to routinely clean out the sherry supply in the chaplaincy Sunday mornings, but that's because it was free and I was poor (the days I refer to now as the dark "Apache Pizza days"). I much prefer your idea.

Someone on this forum owes me a mix tape. Like, right now.

Whoever it is, I hope s/he's paying attention!

Ha ha ha. I love this story. Toner's is my local, and whenever I bring in visitors, I tell them that story. Class.