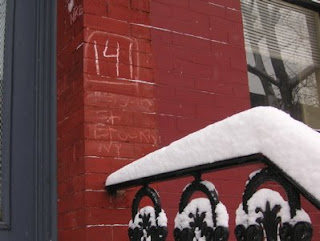 #141, Bergen Street, Brooklyn
One morning back in February, I was standing at the counter of the Fall Cafe on Smith Street, chatting with Chris while he made my latte, leaning on the counter and eagerly awaiting the injection of caffeine I so badly needed. Beside the tip jar was the usual array of flyers and postcards for upcoming shows: announcements for dive bar bands and one-act plays and Brooklyn craft shows. One especially neon postcard caught my eye. It was for a house party in one of those hipster enclaves I usually avoid: Greenpoint or Williamsburg. "Party with all the Brooklyn street artists you have a crush on!" one card announced, oozing with self-referential congratulatory hipness. I filed this bit of information away as irrelevant when suddenly, scanning the list of artists on the flyer, I had a start. Hang on, I thought. I do have a crush on a Brooklyn street artist!
His medium, as it happens, is chalk and not spray paint. And his name is Ellis G.
You'd be hard pressed to get me to agree to this many days, buried as I am Pig Pen-like in the cloud of white dust that is every English prof's lot in life, but chalk can be kind of awesome. Out in nature, out on my free time, I can appreciate it for what it is: whimsical graffiti that starts to vanish the minute it's applied. Finding a bit of unusual chalk art feels like a secret between me and the city, one that I can enjoy more knowing it will soon be swept away by the elements.
I wasn't always this enamored. Ellis G. - the street artist famous in Brooklyn 'hoods for his chalk outline drawings - merely irked me in the beginning. Who was this artist and why was he post-dating all of his works? (Outlines drawn in 2006 would be signed Ellis G. Copyright 2008, and so on. What was up with that?) Then I started noticing them more and more, phantom shapes appearing on sidewalks and building walls: a bicycle tire, a fire hydrant, a street sign. I began to look forward to them. They were surprises on familiar street corners, luminous companions on late night walks home from the F train.
About three years ago, the New York Times did an article on Ellis G. - real name Ellis Gallagher - that shed more light on the man behind the shadows. The more I learned about the artist - he began drawing chalk outlines after his own "brush with crime" - the more I grew to love his drawings and the random joy they create in strangers. It's a great read, especially if you have ever been lucky enough to see one of these drawings in person. Then I saw this image and my heart nearly melted. The caption (photo credit: Chang W. Lee) reads: Ellis Gallagher drawing the shadow of a stop sign and explaining what he is doing to a young admirer. 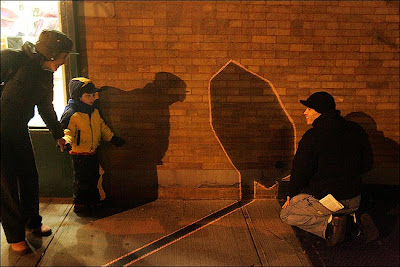 My street art crush was officially born.
In today's 141, the freshly fallen (and soon-to-be-filthy) white snow and the stark, faded chalk make this picture ephemeral times two. And while the street-artist-I-have-a-crush-on was not, far as I know, responsible for the 141 above, his work is so intertwined in my mind with chalk drawings in Brooklyn that it I can't see anything in Boerum Hill and Cobble Hill written in chalk without thinking of Ellis G. If you look closely, you can see scribbled beneath the 141: "Bergan St, Brooklyn NY." I'm not usually one to find misspellings amusing - and woe be to those who think "k"s replacing "c"s are somehow cuter, especially where the word "car" is concerned - but having the street name etched onto brick in chalk is such a rarity I'll make an exception. Also, I've had my mind changed more than once about chalk drawings, so I'm less quick to judge harshly these days.
A coda to this story: I was exiting the F train at Bergen Street one night. It was late at night and I'd dragged my harried body up the steps, tired from the long day and thinking only of getting home. I spotted a bicycle wreck on a mangled street pole, lined in familiar blue chalk. In block letters, a message was scratched out next to it: LOOK UP.
I turned my face up to the sky and beheld the eerie, smoky, glowing image of a lunar eclipse. It had only started some minutes before; by the time I got home, it would be gone. I stood bewitched by the surreal sight, unthinkably distant above the bodegas and the rooftops, a thing of beauty I would have missed if someone with a love of the fleeting and the sublime hadn't taken the care to remind me.
Just before turning around to leave, I spied a hooded figure on the street corner, pacing up and down furtively. Maybe he was just watching the eclipse, maybe he was out buying a bag of chips. Or maybe he was checking to see if anyone had stopped to notice the message on the sidewalk, pocketing his stick of chalk, grinning at his handiwork. Wondering if any other souls in the city could see the beauty he wanted us to see.
Posted by Therese Cox at 12:00 AM

Wow. What a lovely story about the eclipse and the chalk. Haunting, really. Ellis G. would make such a great character for a short story...

Chalk drawings. So ephemeral. The only one's I've seen have been via photos. Carlsbad's ArtSplash has a yearly competition for chalk artists, both pros and amateurs. You can read about it here.Excellent read.

Jackie, I hear ya. Ellis G. always adds a bit of magical realism to my day. Maybe Gabriel Garcia Marquez can get to work on it. If he's not too busy writing memories of his melancholy whores, that is.

Ken Mac, mmm. Almost as good as a city fire escape in the snow...

And Pierre, thanks for the tip. Those are some cool images. Though you do have to wonder what they do if it rains. Sorry - glass half empty, etc.

Great writing. I had the same transitional attraction to his work--from indifference to adoration.

Another great story. Is it just me though, or is the artist really only about 17 years old?

thanks for sharing your Ellis G. story with us - we're new fans now!