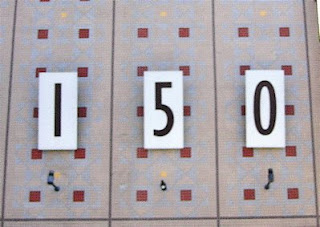 #150, Wilshire Blvd, Los Angeles
Not to make light of it, but all of my L.A. photos are basically drive-bys, sniper photography, just-point-the-lens-out-the-window-and-shoot variety. There is no strolling around Los Angeles, there is only driving. The freeway's rock crushes the sidewalk's scissors, so to speak, and if you're lucky enough to see a number under 3000 on a building, then you'd better catch it quick before it's spirited away behind a curtain of palm trees and some suntanned jerk's souped-up convertible. In fact, there was a fourth number off to the left of this one which was conveniently obscured by some blurry obstacle. It stands well on its three good legs and I like that till now, no one else ever looked at this wall and thought, with satisfaction, "150."
Midwestern by birth and East Coast by disposition, I find the whole West Coast lifestyle fascinating. I look at California the way a kid regards a big, beautiful bug trapped in a jar, unsure whether I should let it go free, stare at it all day long, or just tear its wings off trying to dissect it. Not to hurt it on purpose, only because I'm just trying to figure out what makes it tick. I'm Margaret Mead among the Samoans out there in sunny, laid back California and I've got the pale complexion to prove it.
And take the architecture. (No, really, take it.) All that minimalist glass and steel colliding with mission revival houses, that skyline that could be Baltimore, no, Pittsburgh, no, what do you mean this is downtown? zips past so fast there's no time to process it all. There is no center. "Seventy-two suburbs in search of a city," is how Dorothy Parker, ever the East Coaster, christened the City of Angels. As for my part, I shouldn't be too quick to judge, but what fun is that. And I've seen, what: three? Four? Ten of those suburbs? See, I can't even tell.
Anyway, Wilshire Boulevard was just hotel after hotel, palm tree after palm tree, and a handful of signs that told me I was in Beverly Hills. But I'm sure I'd have seen much more to this sprawling, cryptic metropolis, if only I'd had the time to look at anything beside the rearview mirror.
Posted by Therese Cox at 12:00 AM

The freeway's rock crushes the sidewalk's scissors - like this

You forgot to mention they are stick-ons