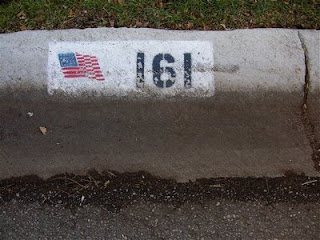 #161, Elk Grove Village, IL
This unremarkable suburban curb, spray-painted and stenciled with a 161, makes me feel weirdly homesick. Fitting, since I grew up in the two-story blue-gray house just behind it. There was no American flag in the 161 I knew - patriotism wasn't quite the growth industry that it is today - but I do recall, in my all-noticing, Harriet-the-Spy way, taking special notice of the fact that all the houses in our neighborhood had the addresses painted on the curb and thinking this was important.
The original black and white 161 was there for years. It underwent a slow fade into obscurity until the village repainted them all, this time with a bright white background with a much larger, tall, forest green stenciled number. The new number existed alongside the ghost for years, and I looked forward to seeing them both when I walked home from school. It was a comforting sight. The numbers - almost more than the house - meant I was home.
Now both of them have faded, replaced by this flag, though I did hunt doggedly for clues to their existence (much to the consternation of the people peering out at me through what used to be my window). Visits to the past can be cool, and then they get creepy, and then it's time to drive off, wondering if the toboggan hill in front of you has sunken over the years or if you always remember things as in a rearview mirror where objects are smaller than they once appeared.
Posted by Therese Cox at 12:00 AM

I LOVE your Blog, so creative and interesting and... important. I will visit often.
Rae

Oh, T, I LOVED this post. Love the idea of always looking and noticing and labeling as "important" even as a child.

Sometimes,(often) I imagine that this notion of personified Sight-- one that doesn't dwindle with age-- is the single most important indicator of an artistic mind.

Thanks for your kind words, Rae, and welcome. Come back and visit anytime!

Jackie - I like that. I always thought it was mental illness. Uh - right?

Hells yeah. I saw Jennifer Jason Leigh in that role. She was amazing.

You could totally rock that part, Jac. Getting repeatedly cast as crazy young women is really gratifying. I miss it.

Interesting. Kerbs played a big part in my childhood too, mostly for games or just for sitting on, but this is the first time I've ever seen street numbers written on them.

Curbs are important in Belfast. Important to know if they are painted orange or green.