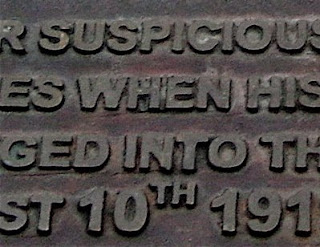 #191, Dublin
This may be one of my favorite stories ever. Today's 191 comes from a plaque on the O'Connell Street Bridge. The entire text of the plaque reads:

THIS PLAQUE COMMEMORATES FR. PAT NOISE
ADVISOR TO PEADAR CLANCY
HE DIED UNDER SUSPICIOUS CIRCUMSTANCES WHEN HIS CARRIAGE PLUNGED INTO THE LIFFEY ON AUGUST 10TH 1919
ERECTED BY THE HSTI

Now Dublin is a town of many plaques. After you've passed the seventh house that tells you Oliver St. John Gogarty "kept rooms here," it's easy to stop paying attention. The plaque to Fr. Pat Noise is welded into the concrete expertly and wouldn't attract any attention unless you were looking for it.
The best part? The plaque, as well as the priest it commemorates, is a complete hoax. It appeared mysteriously on the most prominent bridge in Dublin in 2004, wedged into a hole that had been left behind by the removal of the short-lived Millennium Clock (a hoax in itself -- but that's another story). The plaque remained there relatively unnoticed until newspapers drew attention to it in 2006. The Dublin City Council threatened to remove it but later had a change of heart. You can still see the dedication to Fr. Pat and his ill-fated carriage there embedded into the concrete of the bridge.
Posted by Therese Cox at 12:00 AM

That's a great story. I'm now wondering what other signs or plaques exist as hoaxes or buried empty caskets.

I never, ever noticed that. Fr Pat Noise - could be straight from Father Ted.

I love that the plaque includes the term "suspicious circumstances." Such an intriguing story. I wonder who would erect such a plaque and why?

Each time I pass through NJ on my way to PA, I giggle at the "Trenton Makes, the World Takes" sign on a bridge over there. The sign seems largely untrue-- but also just so brazen. Do you know the one I mean?

Pierre - It's got me wondering, too. The only one I can think of is a silly plaque I've seen a few different places that says "On this site in 1897, nothing happened." Mail order hoaxes - not as good as the real thing, don't you think?

Radge - Let me know if you find it. It's so seamless. I would never have noticed it if I hadn't had the tip-off. But yeah - totally Father Ted.

Jackie - Wow. Wow. That is one freaky sign in Trenton. I passed one today in Wisconsin I still don't understand. It said "COOL BULLS, HOT GENETICS." I don't think I want to know...

Therese, that is just so, so funny. I never heard about it before. Can't wait until the next time I'm in town. I'm astonished that it hasn't been removed. Is the spike on O'Connell Street a hoax too?

The Dublin City Council has a sense of humour. Well ...