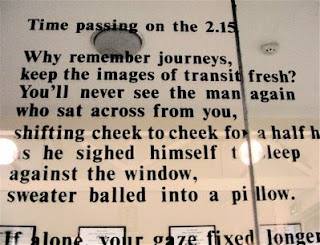 #215, Dundalk, Ireland
Four weeks, twenty shows, twenty-five states, some nine thousand or so miles later, I am at last back in Brooklyn after a month out on the road with Balthrop, Alabama. I have stared out of van windows at the passing landscape of America. I have visited truck stops and Love's Travel Centers and refilled, in various rest stop bathrooms, a dented Dasani water bottle that lasted me all the way from Chicago to Phoenix. Some drives were short but some pushed the eight, nine, ten hour mark: New York City to Pittsburgh; Tuscon to Louisville; Athens, Ohio back to Brooklyn. We had plenty of diversions along the way to keep us sane: we had Patton Oswalt and Dave Chappelle to make us laugh, the incomparable coal miner's baritone of Lorne Greene to make us wish we were cowboys, and more Wilco and Elliot Smith than you can shake a stick at. We told jokes and filmed the view through the cracked front windshield as the green Highway Gothic signs lumbered past. But along the side of the road, hour by hour, day after day, there was nothing but the infinite weirdness of the United States of America to entertain us. And entertain us it did.
Staring out the windows of a rapidly moving vehicle isn't just a way to pass time; it's also a sort of talent. After I've popped a Dramamine and downed a hot coffee, I'm good to go. Just set me next to the window, put on some tunes, and I'm set.
Back in the middle of the last century, when highways were still young and Subways (the food chain, not the trains) were not even a twinkle in a marketer's eye, there was a lot of bare countryside. Burma Shave signs were there for a bit of excitement, a kind of early version of Times Square, but apart from a few gas station signs or town names, there wasn't much roadside reading material. Enter the "roadside attraction," stuff they made up to make you stop along the way and wonder who came up with this stuff and why you can't quite seem to resist it. Cactus Stuff: Exit 72. North Dakota Cowboy Museum: Exit 27. The Santa Cruz Mystery Spot, Crazy Mountains, Buffalo Skulls, the World's Largest Rocking Chair. I may not have seen it all, but I saw signs for it all, which is probably just as good -- if not better -- than the thing itself. After the twinge of disappointment I felt at the sight of the Largest Cross in the Western Hemisphere (in Oklahoma, just in case you were looking for it in Sierra Leone), I think it's better to keep some things mysterious.
Billboards and signs are the only reading material I bring for the road. On these little reservoirs of text, you can see America in all its diverse weirdness. The practical and hopeful nuzzle together; the comedic and tragic come to blows. Buy this, stop here, look out for that: America is nothing if not eager to tell you -- or sell you -- something. Ads are nothing special, but it's the weird stuff I relish: poetry painted on barns, papier mache dinosaurs, the forgotten and unloved museum. So I get really excited when I go to another country and I see a little glimmer of the roadside attraction.
I've spent a lot of time on the Dublin to Belfast Enterprise train. It's a pleasant but unremarkable railroad amble, about three hours or so, with a smattering of stops along the way. I have the stops memorized: Dublin Connolly to Drogheda, Drogheda to Dundalk, then Newry, Portadown, and finally Belfast Central. One of my favorite things on the route is the railroad platform at Dundalk Station. Passing through it the first time many years ago, my eye was caught, appropriately enough by this bit of text, painted in a cheery hand alongside a flower box:

I scribbled it down in my small green notebook as the train pulled away, but that was all I'd had time to see. Afterward, staring at the monotonous passing trees and greenery, it seemed like a mirage. What was that all about? Had I dreamt it all up? A few days later, on the trip back down from Belfast, I eagerly anticipated the Dundalk platform and its unexpected poetry. It made the train journey more exciting: just those small bits of text that I hadn't expected seemed to give the trip some larger meaning -- a reason for being. Each time I took the train, I would look forward to that strange poem of unfulfilled desire and feel something of the same whenever the train pulled away.
It was years of occasional trips before I finally stopped over in Dundalk presumably to do some research for my novel but really -- I knew my true motive -- to find out once and for all what the rest of the poem said. I was surprised and delighted to find that poetry was all over the station: scrolling on platform canopies, arching over the Victorian covered walkway, in plain view on the windows of the waiting rooms. There was also a small railway museum on the platform, honoring the old station masters from W. Catterell (1874-1884) to B. McQuaid (1988- ), and providing a young couple a place to make out among the poetry and the white plastic chairs.
And there was this: Time Passing on the 2.15. Why keep images of transit fresh? Anyone who commutes knows how easily they can go stale. So whether you're passing through North Dakota or Drogheda, New York or New Mexico, I'd like to know from my readers: what are the attractions that have made some of your journeys memorable? What are the signs or unexpected images that keep your journeys fresh? And no Subway: sure that's cheating.
Posted by Therese Cox at 12:00 AM

The trip in numbers is very pleasant. I have spent with you some good time. Thank you.

Your post today brought back memories of our June drive from LA to Chicago.

What was up with that World's Largest Cross in the Western Hemisphere?? A lot of nothing as far as we were concerned. Though Mitch did take pics through the windshield as we drove past.

Got all excited about the rocking chair when we saw the signs; didn't see it from the interstate, and didn't bother to hunt for it.

Kept seeing signs for Historic Route 66, and would catch glimpses of the old roadway running adjacent to the interstate every now and again. We wondered what travel on that two-lane road would have been like 70 years ago. It made the 11 hour days go by a little faster.

Sounds like you just had the most inspiring trip, I love those moments when you finally stop and the details come rushing back to you so quickly. Thanks for sharing, love the &7 blog.

Strangely enough I blogged about the attractions of long-distance coach travel today! In a coach it's more what happens inside than outside as far as I'm concerned. European coach travel can pass through 4-5 countries sometimes and you can meet a fascinating mix of people. Also in Europe there are far fewer open spaces, so the view from the bus is often just throbs of evenly-spaced orange lighting and the blocks of out of town retail centres.

Welcome home, T. This was a gorgeous post. Sometimes I think unexpected poetry should be the only kind.

There is this "tree" on the way to central PA- that in actuality is a very large pole decorated with pine needles, as if the pole itself is an intrusion to nature. I was first fascinated by this tree because it reminded me of a Seussian drawing but then as I got closer, the fascination grew because I realized that it was not a tree at all. Regal in its strangeness and all of the fictional back story it inspires.

And of course, cows. I LOVE to see a whole pasture of big ol' cows and say, "I gotta go, Julia! We got cows!" from the movie Twister. I'm a strange traveling buddy, I think.

Pierre - Thanks for following along. Portland sends its best. We loved that town.

Designslinger - Wow, so you shared in some of the same roadside delights we did. I think Oklahoma and Missouri should've planned it so you could sit in the World's Largest Rocking Chair and look at the World's Largest Cross in the Western Hemisphere. Would love to swap Route 66 stories with you sometime. We met some nice folks in Amarillo who refer to it lovingly as "the Mother Road." Beyond all the kitsch there is a real reverence there.

SP - Thanks for dropping by. There's something infinitely fascinating about the road trip - combine it with being on tour and a hunger for roadside oddities and this was nearly overload. Glad you enjoyed.

Adam - Your coach travel piece was delicious. I loved the compare and contrast with inside vs. outside diversions. I have a lot of catching up to do with your blog. Keep it coming!

Jackie - Where is that tree? I wonder if we might have passed it along the way. Thanks for the welcome home. Glad to see from your Poe sketches you had a fruitful road trip too.

Monsieur pierre is not Pierre. Not an imposter mais someone other. I'm the ex Portlandite. Viva la difference!

The one thing that sticks in the mind regarding road trips is the Wall Drug signs across South Dakota. We had to stop and see it.
We got their free water.

Thanks for the memories.

Pierre & pierre - my apologies for the doppleganger-esque confusion. I've got it all worked out now. Good thing I didn't go to Pierre, North Dakota this time around. Think of the chaos.

As for Wall Drug, South Dakota, I remember seeing a sign for it in Amsterdam. That green and white font is nearly as iconic as American Highway Gothic road signs. Glad you got some free water out of it, anyway. I couldn't get past the parking lot the time I visited.

You gotta see this photo, the 8/3/09 post for Gliwice daily

I watch the Enterprise shoot through Laytown most mornings while I wait on the platform for the slow train into Pearse.

What's the story? I see you link to Coddlepot (*ahem*) and you hail from Chicago originally? I think we have to be related in some way. You're not a Mekons fan as well are you?

I eat the Mekons for breakfast and your playlist for lunch. So was it the Bloodshot reference or do I just give off that Fear & Whiskey je ne sais quoi? In any case, welcome, John. I envy your Enterprise trainspotting and like your site. Come back and visit.

Let's just call it the curse of the Mekons. It's how we spot one another.