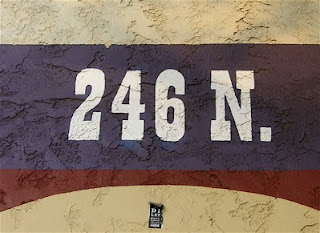 #246, Tucson, AZ
It's a sad fact of modern life that in nine bands out of ten, the band sticker will outlive the band. Think about it. How many times have you ventured into a venue, strolled over to the bar, and noticed the legion of band stickers plastering the black plywood sound booth? It goes without saying that nearly all the names are for bands you've never heard of: Ninjas Who Met God. Wax Fang. The Suicide Instigators.
Vandalism aside a moment, there's something heroic in it, a tragicomic element to the endless trail of bands who were never big enough to even be forgotten, their clever names overlooked night after night for years, their website addresses dismissed, their industrial strength adhesives enduring far longer than the band itself.
The impulse to stick band stickers on walls: I've never had it, but for years I've been an avid recorder of it. This particular sticker, clearly more transitory than the indoor sound booth variety, was an accidental element to the 246. I didn't even notice it until looking over the photo again. It's tiny, but you can see the shape of the traditional eye chart. It's for Dilated Peoples, an underground hip-hop group based out of California. They're still around. Who knows? Maybe the Dilated Peoples, clinging ardently to a variegated wall in Tucson, will be one of the brave few to outstick the band sticker.
Posted by Therese Cox at 12:00 AM

The link to the neon sign yesterday was an example of the Stroop effect. I think you would enjoy reading about its use in psychology:

Thanks for the info, GDP. I was just calling it the "whoa, dude" effect. This is much more scientific.

I love the layers of forgotten and half-forgotten band stickers that accumulate in and around bars/on telephone poles/where there are clear signs to Post No Bills... It's really great that you have the desire to catalogue them; that had never occurred to me.

Dilated Peoples is a cringe-inducing band name, though. Sorry!

Ray, I also like the occasional Pay No Bills stencil I see from time to time throughout the city. They got the font down perfectly.

With a name like that it was apparent they would be seen by few people.