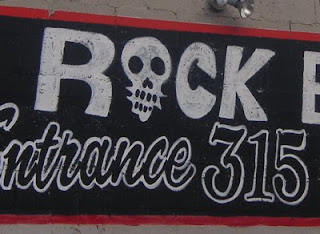 #315, Albuquerque, NM
Here's another gritty Albuquerque still life to continue Urban Decay Week. Because everybody loves a real, honest-to-goodness ROCK BAR and nothing says decay quite like a skull.
I'll be making my fiction-reading debut tonight at a black box theatre in the East Village, so I'll indeed be summoning all the bad-assitude this skull brings with it. I'm reading an excerpt from that nearly-done novel I keep cagily alluding to, and if all goes well, this will be the first of many.
When I'm not behind the lens or hiding in a café amidst a muddle of manuscript pages, I'm often doing something extroverted on a stage. I've sung Brecht wearing mime makeup and hobbled around as one of Beckett's crotchety old men. I've pretended, via the medium of modern dance, to suffer heroin withdrawal. Heck, I've even played accordion at a party hosted by Salman Rushdie on board the Queen Mary 2.* (Hmm... I notice in this run-down of the event, I'm described as "finishing up a novel." Yup, the same one I'm "finishing" up now. Apparently, I've been "finishing" it since March of 2008. Do not listen to anything I say about deadlines.) But read my own fiction? Like, out loud? In front of, you know, people? What are you, crazy?
Funny the way the nerves kick in when it's your own work you're reading. I may have to bring an accordion along simply for a security blanket. But there will be friends in attendance (including this delightfully talented friend, who will also be reading from her work-in-progress), and there will be wine consumed, and you don't need much more than that to have a class act evening. Bring it on.
* Salman Rushdie, alas, was not in attendance. But dude throws a mean soirée.
Posted by Therese Cox at 12:00 AM

You'll be great!
We'll be cheering you on all the way from the shores of Lake Michigan! :)

Many thanks! You know, I may have to paste a little sticker of the designslinger icon on the corner of my manuscript. He's so damn adorable.

Playing in public was relatively easy. I could hide behind my drums. I tried my guitar in front of family last year. I choked. I was too nervous.

Dale Peck is in that picture! Ahahhahaha. I forgot you know him. Funny ol' chap.

Thanks, Pierre. It was a great reading.

Jackie, I'm thinking there's something for the author bio: "Accompanied live by Dale Peck on tambourine and kazoo." Seemed to be a nice guy.

At least he didn't hate my accordion playing.

That skull could do with serious orthodontal work.