Do Not Write To Me As 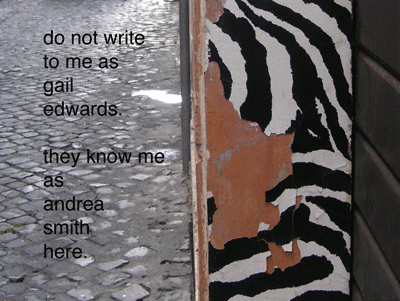 Rome, Italy
A beautiful feature of books is that they, unlike their fashionable electronic counterparts, are not only written, they can also be written in. Annotation is an act of intelligent vandalism that I -- unable to participate in such defacing myself, having spent too much time in book conservation -- can appreciate. When you read with a pen in hand, it's less monologue and more dialogue, and that's exactly the sort of thing that can make reading so enjoyable. That is, unless you're an OCD freak like myself, in which case your pen is firmly capped, your pint of Smithwick's placed at a safe distance, and you check all your rearview mirrors before turning to the next page.
Fortunately, technology is on my side. Thanks to the invention of the mighty Post-it, and because I'm always hunting for excuses to crack open a freshly minted 3-pack of Moleskines, I tend to keep track of the stuff I read in places well outside of the book's sacred margins. I'm calling to mind an essay I read in the New York Times Book Review some time ago on this very topic. I flip back in my own small notebook, dated December 2008, a cream-colored Fabriano journal with red spirals on the cover, and sure enough, there are my notes on the article by Henry Alford: You never know what you'll find in a book.
There is nothing quite like walking into a used book store, taking down a book from the shelf, and unwittingly stumbling onto clues of the lives of others, revealed to you by what they have left behind in the margins -- or sometimes in the leaves of the book itself.
You open a book in a university library and out falls a yellowed letter with this curious first line: "Do not write to me as Gail Edwards. They know me as Andrea Smith here." Torn-out drink menus. Grocery lists. Business cards. Who were these people? Why is there a full-page Rimmel ad in the leaves of Faust? Forget CSI -- I want to join the ranks of UBI: used book investigator.
Because of my previously mentioned, er, tendencies (did I mention I go into tremors at the sight of a dog-eared page?), an inspection of my own bookshelves would yield little in the way of my own marginalia except for a three-month binge where I read everything by Nabokov I could get my hands on and was so blindsided by my enthusiasm for the stuff I just had to underline. I've left behind some loose-leaf evidence: crosswords from the Irish Times (I don't do them -- I just enjoy reading the out-of-context cryptic clues). BookCourt bookmarks. A few wayward Post-its. But more interesting are the strange confetti that fall from the pages of a used book unexpectedly. These offer far more cryptic clues, and they act as reminders that the book's journey started before me and will continue after I pass it on to another.
Which brings us to inscriptions. I tend to be, frankly, a little creeped out when I find these in the front cover of a book, most of all because I can see only two reasons for giving away a book with a personalized inscription: 1) the sentiment, heartfelt when it was written, has since been discarded, scorned, or forgotten or 2) someone died. Owning one of these marked books can be even worse. That heartfelt inscription is a constant reminder that the book will never be truly mine. It was intended for Marjorie, Merry Christmas 1962, and always will be. If it says on the ornate sticker Ex Libris Bradford J. Sebsad, then Bradford, as far as I'm concerned, that book is yours and always will be.
The Book Inscriptions Project is a great online collection of these mysterious hand-written dedications. But I find these a little easier to look at, maybe because they have already creeped somebody else out, and I'm just getting the morbid fascination secondhand.
I have to half-retract my scorn of reading things on a screen, though, because first of all, I write a blog, and secondly, I've spent enough time scrolling through the scanned marginalia of writers I love to understand the pleasure of seeing things written in a writer's own hand. If you want to know how to get me to waste a good half hour of precious time when I could be reading my Twitter feed, you'll give me the link that answers the question, "What words did David Foster Wallace circle in the dictionary?" Simply put, I love seeing the notes writers make in their books and manuscripts. Think of it as a literary version of the breathless Us Weekly feature about how stars are just like us. Famous Writers: They Scribble Notes, Too! I'm still waiting for the windfall that will allow me the extra pocket change to get Nabokov's The Original of Laura, which has been published, quite awesomely, and among much hullaballoo, as a series of scanned index cards with Nabokov's carefully pencilled script. Not quite the real thing, but deliciously close.
In the meantime, if you've come across a curiosity in a book -- whether it be a note scribbled in the margins, an odd underlined passage, or a sliver of ephemera that slid out when you first opened it -- I'd love to hear what you've found.
Posted by Therese Cox at 12:00 AM

Great piece, Therese, as ever. I love finding things in old books too. A couple of years ago a friend asked me to read a Shelley poem at his wedding. I had an old nineteenth century edition of Shelley so read from that, and when I remembered that it was inscribed as a gift for someone on their wedding anniversary in 1889, I had to give it to them as an extra wedding present.

One mystery I'd like to solve is in the front of my 1930 edition of H.V. Morton's 'In Search Of Scotland' (Morton is my favourite travel writer: I think you'd like his 'In Search Of Ireland'). Carefully glued onto the first inside page is a small black and white photograph of two young boys standing by a tree in a garden. The picture looks to have been taken in the thirties or maybe even the twenties.

Then I noticed that the following two pages appeared to be glued together. The passing years meant that the glue was not nearly as adhesive as it once was so I carefully peeled the pages apart to find the signatures of a dozen women or girls.

Why had twelve women signed the book and why had that page then been glued to the previous one as if to hide the signatures forever? Who are the two small boys in the picture, and why are they peering at me from an old travel book about Scotland?

I fear I'll never know. But that's ok. Like you say, that book will always belong to them and the twelve mystery women whose names are inked onto a yellowing glue-stained page.

I'd love to track them down and return the book to them or their families. You never know, one day maybe I will.

I've never even seen an electronic book let alone touched one, but I believe it is possible to add annotations. However, these will always remain purely personal unless in the future there is some kind of 'second-hand electronic bookshop'!

I have much of the 'family library' which is not so much a library but a collection of books that were owned previously by family members, many now deceased.

My mother had a way of rolling her bus tickets into a hollow spiral and every now and then I come across one in a book I take from the shelves. It puts me in mind of her journey on the bus home from work. Engrossed in her book while the fingers of her other hand absentmindedly coiled her ticket into a miniature paper ziggurat, now flattened between the pages.

Charlie - Those are both amazing stories. I'd love to play Watson to your Sherlock on the 1930 Scotland book. I've never read H.V. Morton - thanks for the recommendation. I'll have to check out 'In Search of Ireland' (after, of course, I've read a certain 'In Search of Elvis').

And what a lovely gift to give away that Shelley book as a wedding present. What was the poem?

Adam - I'm trying to wrap my head around an electronic second-hand bookshop! And yes, I think there are ways of annotating those books... I know that I am a big fan of the "add comment" feature on Microsoft Word - my manuscripts are littered with electronic Post-it notes, too. (But pink? Why are they PINK?)

Conan - What a beautiful story. I love the idea of coming across these small treasures, things that could have otherwise gone forgotten.

Your story of your mother's bus tickets reminds me of how a few years back, we discovered - in a volume of those Great Books or Modern Library or whatever - a note passed between my uncle and his friend when they were both boys in the 1950s. It was full of bizarre codes and hand signals. My uncle read bits of it out loud and had us laughing hysterically.

Marginalia - great word. I'd add more but it's been a long day of grind and stomach-ouch.

Radge - So much nicer than "stuff in the margins". Same number of syllables, but far more fun to use.

Tea, your comment balloons don't have to be pink. You can set your preferences to have them come up in virtually any color you like. But they are always a pale version of the same color as the text insert color chosen, which is red as default.

Funny how we've both had Post-its on the brain.

Ray - You are way more resourceful than that MS Word paperclip guy - not that I'm surprised by this. I do believe I'll switch to canary yellow virtual Post-its, which work so well on your site.

Um... What's this about Osiris?

Osiris was one of the words DFW circled. Can't help but see that now as sad/eerie.

:sigh: Thanks for clarifying, though.

There is a used book "store" in New Haven called Neverending Books. I use quotes because nothing there is for sale. It's a bit of a take a book/leave a book situation, and you can make a donation if you're so inclined. As such, many of the books there are...less popular titles (to be nice). A friend suggested taking a few and underlining/highlighting sentences or phrases at random to provide an unsolvable mystery to some future reader. I don't know if he ever went through with it, but the idea amuses me.

Indeed. Nothing wrong with indulging one's inner Nancy Drew every now and then.