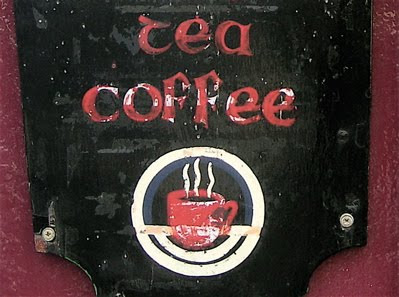 Baggot Street, Dublin
Poor W.B. Yeats. Seventy-one years after his death and while the rest of the world reveres him as the formidable author of poems of terrible beauty, in Dublin, he's still the guy who was dragged into Toner's, ordered a sherry, and rose stiffly from his chair, announcing, "I have seen a pub. Will you kindly take me home now." Hard to live that stuff down, bud.
Toner's happens to be home to my favorite "James Joyce and Sean O'Casey drinking absinthe" mural, but it's also home to this small typographical gem of a sign on the exterior of the pub, just near the entrance. Perhaps Yeats, not known to be a drinking man, could've saved himself from ridicule by ordering a simple tea or coffee instead of a sherry, which I've only ever imbibed because I was getting drunk on a Sunday morning in the chaplaincy with the Trinity College Chapel Choir. (Proper routine was to drain the bottles quickly, then wait out in the street till O'Neill's opened to wash the churchy taste out of our mouths with a proper pint and a carvery lunch.) It's hard to imagine sherry being anyone's poison of choice, but then "The W.B." had other things on his mind than what he was drinking.
Hard drinking habits aside, I'm always a sucker for a good Irish/Gaelic "T" and a hand-painted steaming cuppa. Goes down wonderfully with a slice of "The Second Coming" or "He Wishes His Beloved Were Dead."
Posted by Therese Cox at 12:00 AM

I'm actually old enough to have learned to handwrite in Gaelic script, and still have a few books in that print - which I presume goes back to the time of the Gaelic League (1880s/90s?). As far as I recall it contains no h/j/k/q/v/w/x/y/z, but perhaps the v crept in.
The worst aspect of writing and reading in that script was/is the similarity between the 's' and the 'f', a bit like the old 's' used in English typefaces in the 18th century, and both dropping below the line.
In the Toners sign it's probably a new 'Gaelic' type... the 't' is perfectly fine but the 'a and 'f's aren't really from the same set. An 'a' properly matching the 't' would be a little like a triangle. That said, a few 'Gaelic' fonts mixing old and new were madey-up in the 1960s, a lot of them used in churches for some reason.

I took little notice of fonts until about 1996... does it get better or worse with time?

(Still have to check out that thing around Mountjoy Street. Soon.)

Actually, since you've made me think about it, the complicating similarity is between the lower case 's', 'f', and 'r'.

Conan & Radge - Hmm, I thought those 'f's looked a little suspect. But legibility over authenticity, I suppose. I'm not a purist so fake Gaelic fonts don't bother me so much. However, the fake Gaelicizing of English names drives me absolutely batty. (Talk about superfluous fadas...) Since y'all are my uncrowned "street team," let me know if there are any particularly distasteful permutations floating about. Perhaps a future post/rant on the subject is in order.

Oh, and the font-noticing gets better over time. Or, if you're obsessive like me, worse. My evil plan to brainwash you is working!