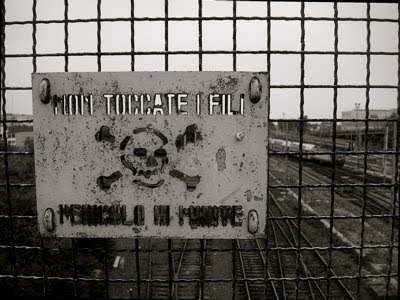 Venice, Italy
The bus from Venice trundled down the long causeway, carting a dazed load of passengers away from the world's most improbable city. I was one of them that day, weary and delirious on a still-bright July evening after my first day of exploring this odd settlement, this treasure nest, this town built on sticks in a swamp.
It's easy to fall in love with Venice. But for me, it isn't about the picture-perfect vistas or the Guggenheim or the 80 cent prosecco you can by from a kiosk alongside the Grand Canal. OK, it's kind of about the 80 cent prosecco you can buy from a kiosk alongside the Grand Canal. But Venice, with its serpentine lanes and secret bridges and dead-ends, is the sort of place where I feel like someone took a screwdriver, dug into the control panel in my brain where the deepest dreams are stored, and programmed a place just for me. My map was useless. I just gave up, and let myself be led.
Just when I thought I'd succumbed to Stendhal Syndrome -- that condition where you pretty much drop dead from overexposure to culture and beauty -- just when I thought it couldn't get any better, I gazed out of the bus window on the way back to the hotel and -- what was that blur I saw? -- SKULLS! Skull signs! Skull signs on a rusty railway bridge! First one, then the next zipped past while I craned my neck to gawk at these high-speed flashes of silver and rust. A morbid procession of eerie warnings flashed past my vision, an entire typographical ossuary. The Rialto Bridge? Yeah, yeah. Sipping prosecco on a gondola on the Grand Canal? Uh-huh. Whatevs. Whisk me off to Venice and all I'm gonna do is slum for skull signs.
The bus passed over the bridge before I could dig up my camera, carting me off to the Hotel Ambasciatori. There I dragged my luggage into the lobby, checked in, and obsessed. About the skull signs. I knew there'd be no rest in my head till I went back to find them and photograph them. Time and distance can be hard to judge in a foreign city with a fizzy head full of bubbly. I knew this. Nevertheless, I gave my head an optimistic scratch and thought to myself whimsically: Well then, how about I just pop out a minute with my camera and take a little stroll to that bridge over the railroad tracks? How far could it possibly be?
Forty-five minutes later, eyes squinting in the hot sun, I arrived to my destination. Skullbridge. Granted, trudging uphill through the industrialized outskirts of Venice isn't everyone's cuppa tea, but it's not a bad way to spend an afternoon. And granted, skull signs are their own reward. But I do recall the weird feeling as I stood by the side of the road, alone in my derelict pilgrimage, stared at by well-to-do Venetians on Vespas as I angled my camera over the rusted railroad tracks. One reason is as good as any when it comes to collecting images. It was a long slog, yes. But worth it. You do it for the love of the quest.
Posted by Therese Cox at 12:00 AM

Skulls. That makes me think of Body Worlds. It's the traveling exhibition of plasticised people who've had their skin and fat disolved and posed in artful positions. I found it facinating. View a sample here:
http://www.boston.com/ae/theater_arts/exhibitionist/2007/01/body_worlds_ext.html

Skull signs I can handle. But I am deeply freaked out by that Bodies exhibition. For awhile I felt like I couldn't get on the subway without them looking at me from the ads. Still, for those less squeamish than I, it's fascinating stuff. Did you see it?

Yes. I've always been interested in the workings of the human body.
I'd like to see it again.

Interesting that you can only handle bones without flesh.

Come to think of it, there are alot of people with all their flesh that I can't handle. Live one's that is.